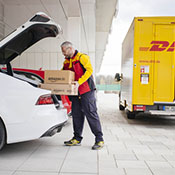 Amazon are starting a pilot scheme in Munich Germany allowing Prime customers to have their parcels delivered to their car boot. The only problem with this trial is that you have to have an Audi to be involved. This new scheme is a partnership between Amazon, DHL and Audi but how will it work?

Customers will give an approximate location of their car to Amazon, the delivery driver will then be given temporary keyless access to open the boot to deliver their package. Once the package has been delivered access will be removed. The driver will have tracking technology on the vehicle for a set period of time during the delivery window, once the car boot has been shut all access will be removed.

The pilot will start in May this year, it will be interesting to see if it works. Giving a delivery driver access to your car with tracking technology is quite daunting but hopefully it proves to be successful. Amazon are also working on a system to allow customers to return items via their car boot.

This could be a scheme that could attract thieves, someone could witness a package being delivered and left unattended in the car. They then could find access to the vehicle and steal the package. There have been several break in’s to keyless cars in recent months with technology being easily attained over the internet. It will be interesting to see how Amazon, DHL and Audi will combat this.

What do you think? Would you use a service like this?