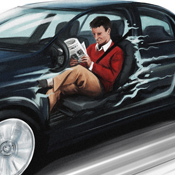 There are already a lot of companies working on technology for creating self-drive cars for the mass market, including Google, NVIDIA, Tesla and most of the major car manufacturers. Today Uber announced that it is going to start researching its own version of this technology so that it can get in on this new field.

Uber have joined forces with Carnegie Mellon University to perform the research and are creating the new Uber Advanced Technologies Centre, in Pittsburgh. As well as financial backing Uber will also be providing staff and other expertise.

With all these companies working on automated cars, it should mean that we can see them on the roads sooner, (whether you think this is a good thing or not). It also means that there should be a wider choice available, rather than having to choose option from just a few companies.

It will be interesting to see what Uber produces, as Google invested over $250 million in 2013. Uber say they are mainly going to focus on mapping, safety and autonomous technology at first. It may be that Google and Uber will eventually share this research.

Uber has been in the news a lot recently mainly with negative headlines about their car hire app. This news shows that the company is trying to diversify and increase their product and service range.

Most of the world’s governments have started to look in to how they are going to change their laws to allow for automated vehicles. It may be that the main thing that hold back automated vehicles will be these laws as quite often technology moves quicker than the government can keep up.