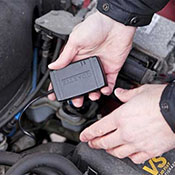 Hundreds of young drivers are getting black boxes installed into their cars for lower insurance premiums. Black Boxes have been growing in popularity for the last few years. Insurance companies are fitting the in-car tracking system to monitor driving behaviours, speed and the time of day the car is driven. The data that is collected from them is used to calculate improved driving premiums. So the better you drive the less money you have to pay.

Many young drivers are in favour of black boxes because they are willing to pay less premiums. With more and more young people having these boxes installed, in theory road safety should improve if their driving habits are being monitored. Drivers will be less likely to speed or drive in the early hours of the morning.

Black boxes have been credited to saving the life of a 20 year old student from Surrey. Max Charles was driving home in the early hours of the morning in November 2013 when he had a serious accident, he fell asleep at the wheel crashing into a tree sending him into a semi-fatal coma. Because of the time of the accident there were no witnesses or passing vehicles. But because he had a black box in his car, it registered the accident and the insurance company contacted the emergency services, effectively saving his life.

The systems installed are designed to detect impacts of crashes that exceed a certain threshold, a signal then is sent to the insurance provider who in turn contact the emergency services with the vehicles location.
Mr Charles told The Independent: “The officer that first found me said that had the black box had alerted them to my situation, I almost certainly wouldn’t have been found until later that morning. I definitely would not have been alive.”

Mr Charles was in the hospital for two weeks and described the black box technology as a “life saver”, he added: “Before the crash I had been deeply sceptical of such technology. I hated the way it watches how you drive, the speed, the times of your journeys and where you are. It all felt like you were being monitored constantly – and everyone, even my dad, had eyes on me. Now I cannot stress how that privacy is worth sacrificing.”

After the accident, Surrey Police tweeted a thank-you to his insurance company, saying: “Thanks to Drive Like a Girl, who rang us when they detected an impact. Without their help, we would not have found the car and driver so quickly.”

What do you think? Would you have a black box in your car? Many people are put off by the fact you can be tracked with these devices, but if it saves your life surely it’s worth sacrificing your privacy.

Let us know your thoughts in the comments below!