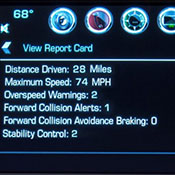 In the new American Chevrolet 2016 Malibu, spyware technology has been introduced to target teen drivers. Made for shared family cars, this technology allows parents to set speed warnings if the driver exceeds the pre-set limit of (40 – 75mph).

This technology follows from Fords MyKey which they introduced to their 2010 Ford Focus’. MyKey is a system that mutes the volume on the radio if the driver has not put on their seatbelt. A chime also sounds every thirty seconds for six seconds until the driver puts on their seat belt.

In the Malibu, parents can receive a vehicle report which details how their teenager is driving, it will show the distance driven in a journey, top speed driven, how many over speed warnings have been issued, how many anti-lock events have occurred and forward collision warnings. Parents can then use this information to determine how their teenager is driving. This technology was made to improve road safety as road accidents are one of the highest death rates for teenagers in the USA.

There are many positives for this technology, better driving should be encouraged and road accidents should be reduced. However some say that this is too much control over their child and that you should trust your child to drive correctly and within the law.

This technology however does not seem to address the problem with teenagers on their mobile devices which is one of the top distractions in young people. Supposedly in-car muting technology is being developed but it is not available to be put into cars just yet.

It will be interesting to see if this works in America. If so, I wonder if this technology will be useful in the UK? Different variations of this technology are being made by several manufacturers, some of which will be available in the UK by next year.

Would you buy a vehicle like Chevrolet’s Malibu to keep track of your child’s driving habits? Do you think this kind of technology is too controlling?

Tips and tricks for finding your perfect private plate

Searching for your perfect number plate can be a chore in itself, many custom...