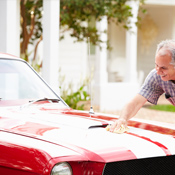 Restoring classic cars is a pastime that many people enjoy, with individuals putting a vast amount of time and effort into bringing an old model back to life. Neill Dutton is one such individual and, having put four years of his life into restoring a class car, the 51 year old is now in the running to win the coveted title of Restorer of the Year.

A lot of time, money and effort go into restoring a car, and its not for the faint-hearted. To find the right parts and get them working again takes dedication, but for those who are passionate about such hobbies, it becomes a labour of love. For Mr Dutton, both the nomination and, indeed, restoring a car at all came as a slight shock. In fact, he hadnt been intending on buying a Scimitar at all, let along one that required an entire restoration.

Talking about how he came to start the project, Mr Dutton said: My friend Terry has a kit car and its great fun so I decided I wanted one too. I was after an AC Cobra replica but after reading the ever changing rules that surround self-built vehicles I became disillusioned. Mr Duttons research uncovered the fact that Reliant Scimitars were great cars to work on, and he went to Kettering and spent Ł700 on a 1975 GTE as a result. Once he managed to get the vehicle home, he realised it wasnt a simple repair job at all, but a full restoration project.

Over the course of the next four years, Mr Dutton worked tirelessly on the car, getting it to the point that he could showcase the Scimitar at Curboroughs Classic Car event. As a result, and in a surprise twist of fortune, the vehicle was awarded the Best Restoration and Best in Show. Mr Duttons reaction: It was a complete and absolute honour, especially as I hadnt intended to restore a Scimitar originally.

Now, Mr Dutton is one of ten finalists who will be showing their cars at the Practical Classics Restoration Show on the weekend of April 12th and 13th at Birminghams NEC. The winner will be the person who gets the most visitor votes, and theyll be given Ł2,200 worth of Sealey Tools.

For those who go through the process of restoring a car, its often the icing on the cake to get personalised number plates too, adding a sense of proud ownership to any vehicle.