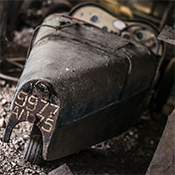 A recent discovery of classic cars in France is up for auction in February. Over 60 cars originally owned by Roger Baillon have been found by his grandchildren on a farm in France.

The cars are all in a poor state as many have been left for over 40 years. Most will need a lot of restoration work if they are ever to be brought back to their former glory.

Roger Baillon originally wanted to create a museum with pre-war and early year vehicles, but when his business encountered difficulties this dream never became a reality.

Auctioneers from Artcurial Motorcars were invited to inspect and value the collection. The auction for the collection is expected to make over Ł12 million. An auctioneer brochure with many high quality images of the vehicles can be downloaded from their website.

Included in the collection are cars from Delahaye, Delage, Ferrari and Bugatti, but the gem is a Ferrari 250GT California Spider. Though it was covered in magazines it is in fact one of 37 built with covered headlights which originally belonged to the French actor Gerard Blain. This car was found to have a pair of driving gloves, several tax disks and two now-vintage toy car tracks- which were thought to be undelivered gifts for the grandchildren. The package, which included the car and its contents was estimated to be worth Ł9.2 million, though the restoration could cost up to Ł1 million.

It will be interesting to see what registrations these cars have. If any have a UK registration the plates alone could be worth well over Ł100,000.

Car registration plates are used to identify you and your car. But unfortunat...

Whilst most cities suffer with some form of clutter or rubbish issue, Dubai’s ev...