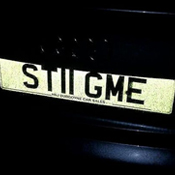 Greg Hemphill, a comedian and actor who appeared in the popular show, Still Game, has snapped a picture of a private reg spelling out the title of the show he’s famous for. Posting the image on a social media site, Mr Hemphill revealed that the ‘STLL GME’ reg plate is fixed on a blue Audi A4. The response was immediate, with fans quickly becoming excited about the plate.

Fans of the popular and funny show about pensioners who are still young beyond their years were thrilled to see the private reg. After some investigation, it was discovered that the car is being rented from a Falkirk car dealership, though the actual owner of the private plate is still a mystery. Some fans continue to wonder if it actually belongs to comedian Hemphill himself, though this hasn’t been confirmed.

Barry Roberts, the manager of H & J Burgoyne car hire, the company from which the car is leased, explained, “Everybody that saw it recognised it was Still Game straight away. I watch the show myself so I picked up on it straight away. The plate was on a car that came for a trade with a maintenance company we do business with. It came on an Audi A4, then was put onto a different Audi A4 we traded with them back in February. Someone must own the plate and since the car is being rented it could be anywhere in Scotland.”

After Hemphill posted the picture on social media, many fans took the time out to show their appreciation, with Stephen O’Hara saying, “Still game love it”. Meanwhile, Heidi Purvis wrote “Yours!!! Or an avid fan!!! Well nice whoever’s this is.” Still Game is in people’s minds at present because the stars have recently undertaken a tour of the show, with eight additional shows being announced after it only took hours for thousands of tickets to be snapped up. Glasgow’s Hydro arena, which seats 12,000, is now expected to play 12 shows, with 144,000 people having bought tickets.

The buzz on social media just goes to show that having a private reg can cause quite a stir. Buying a private number plate can be a great way of showcasing personality or, in this case, celebrating a favourite show. And, for those keen to create a stir and find some extra pride in their car, utilising a private reg can be the ideal way to do so.