The Tokyo Auto Salon (January, 2016) was host to a range of spectacular, eye-catching vehicles. Arguably, none more so than the Lamborghini Murcielago, which was embellished with countless pink Swarovski crystals. However, Lamborghini were not the first; nor will they be the last car manufacturer to feature the trend of blingy bodywork on their cars.

So how do car manufactures achieve this glitzy effect? We take a look at some of the best designs and discover how.

According to luxurylaunches.com, the two Mecedes-Benz-SL600 cars also featuring at the Tokyo Auto Salon, were ‘drenched with 300,000 Swarovski crystals’, creating a dazzling, glittering effect. The manufacturers opted for the classic colours of silver and gold. Even the wheel trims were encrusted with the shimmering stones. 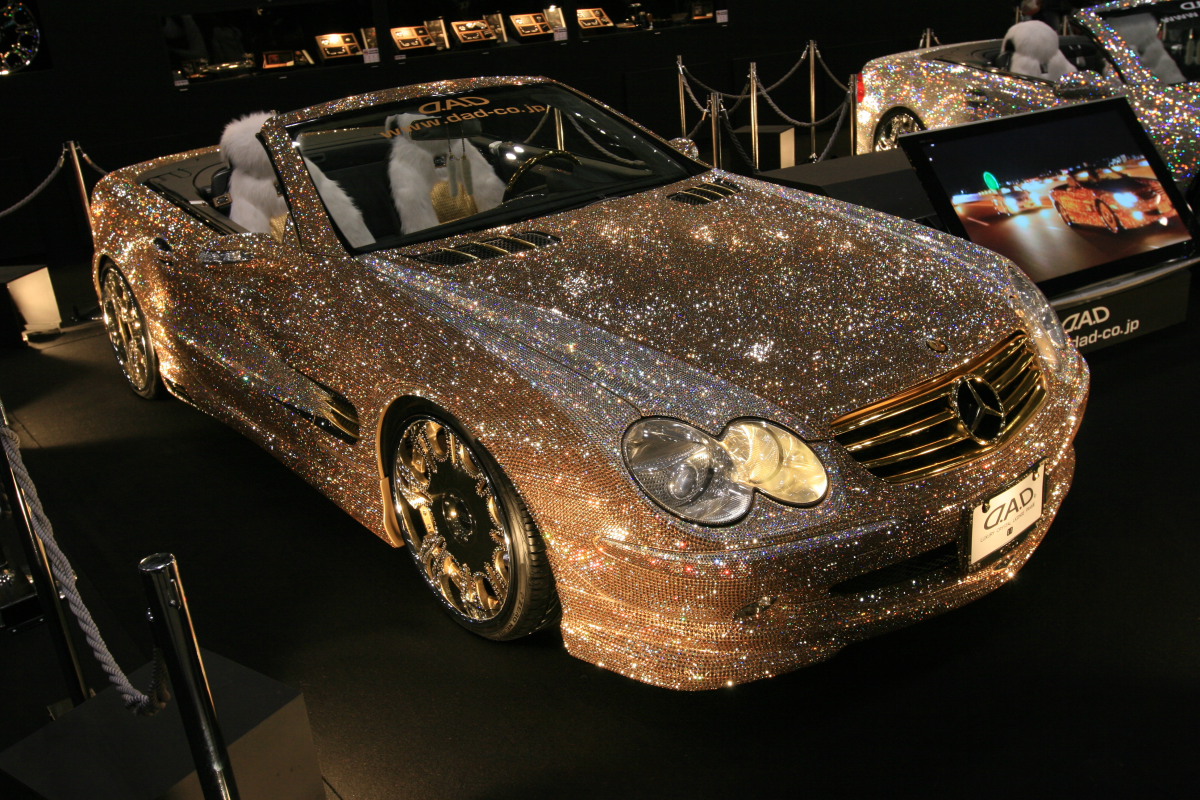 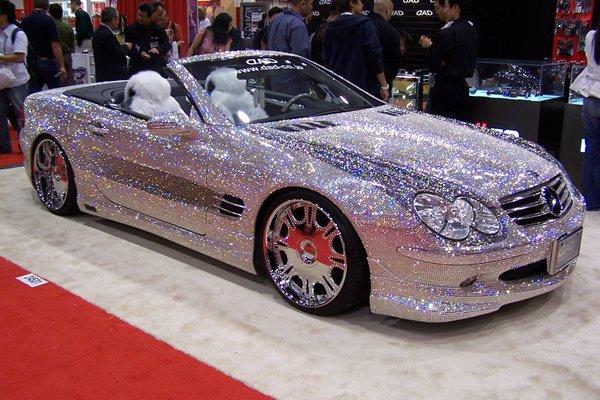 Similarly, a replica model of the Porsche Speedster was reported by topspeed.com to have also used a staggering ‘300,000 of Swarovski’s finest crystals, which even covered the seat-belts in the vehicle’s interior’, giving the luxury sports car a striking appearance. 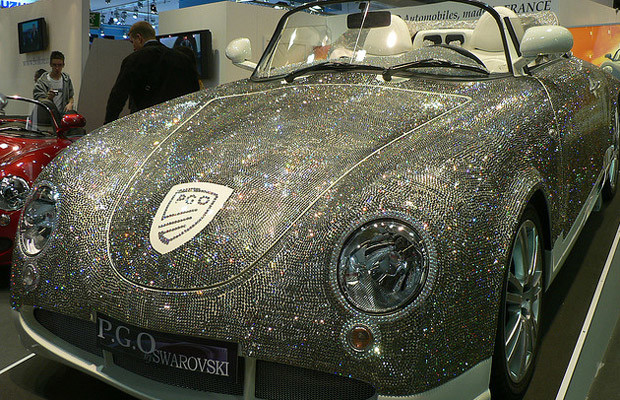 It would appear that it is not just car owners who are looking to adopt this trend. This Harley Davidson Sportster Nightster has also been encrusted with the Swarovski crystals. 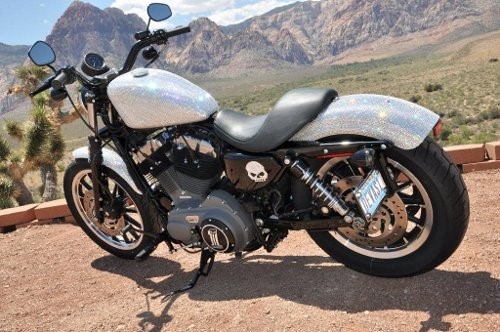 If your budget doesn’t quite stretch to Swarovski’s signature crystals, there is another option to add some sparkle, with vinyl glitter wrapping.  Using a coloured film, the entire body of your vehicle can be transformed with a new colour or design. The wraps are often applied in one transfer so that there are no visible seams. To do this your lights, number plates and badges may need to be removed, but they will be reapplied later.
With the growing trend of customising your vehicle’s bodywork, those who are seriously considering this option should be aware of the potential pitfalls of the process.

As noted on chipsaway.co.uk, you should be aware that:

•    Your insurance provider should be informed

•    When removed, the paint could be removed along with the plastic.

•    Many have discovered deep scratches their car’s paint on removal of the wrapping, caused by the fitter’s knives when applying the vinyl to your car.

However, if you source a reputable, trustworthy fitter, the effect can be exquisite.

The ‘pink galaxy’ vinyl wrap around this high-performance sports car is visually stunning. Although the design makes use of the girly-girl hues of silver-pink, the detailing of the galaxy motif, using purples, blues and periwinkle offers a classy touch and a more bespoke, personalised design. 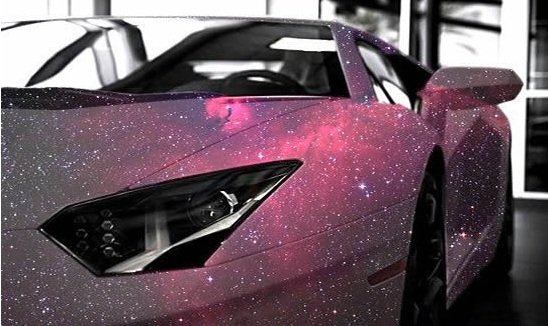 The touch of sparkle on the cloudy-grey bodywork of this Ferrari 458 Spider is subtle and yet, striking. The concentration of glitter on certain panels of the car accentuates the sculpted lines of the vehicle, complementing its aerodynamic design. 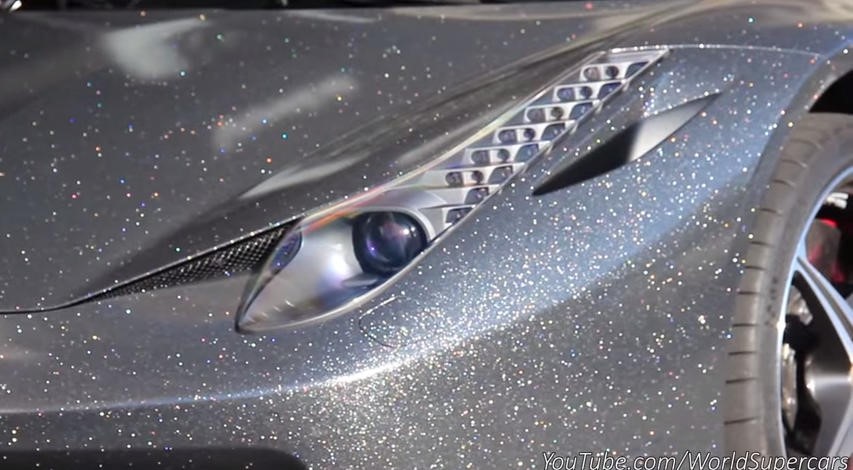 The release of the new Dodge Viper astounded onlookers with this gorgeous colour of cherry red. From a distance, the shimmer of the bodywork is subtle. This is a definite example of vinyl wrapping done right. Both men and women would be more than happy to be behind the wheel of this sporty number. 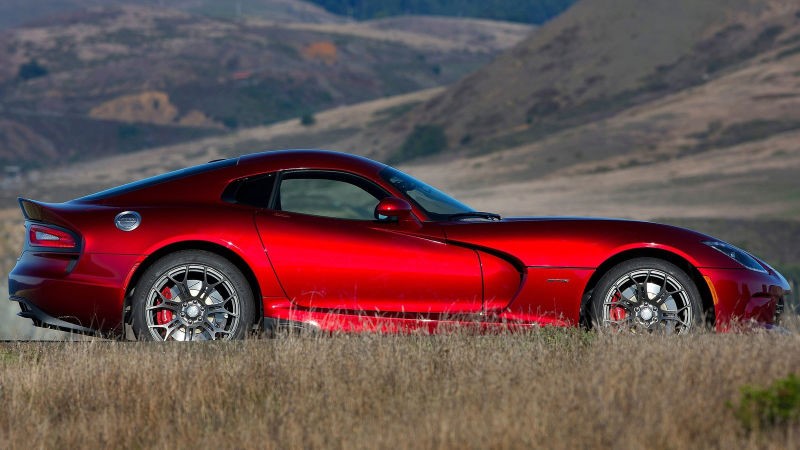 It is not just supercars and exhibition vehicles that are opting to add a touch of sparkle. This Mini Cooper has opted for a lipgloss pink colour with added sparkle. We’re not sure too many guys would be seen driving this design down to the local shops, but for some girls this pretty-in-pink car would be their dream drive. 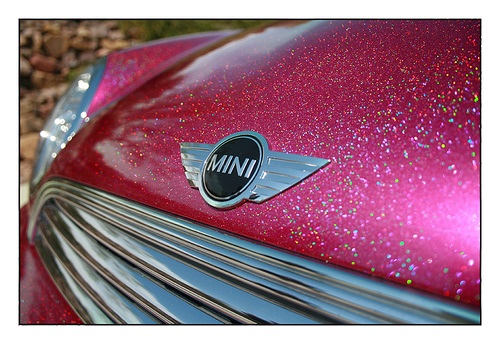 Although these cars can be admired for their novelty factor whilst at auto salons, exhibitions and other such events; most would agree that for your everyday A-to-B, the Swarovski-studded crystal vehicles are not practical. Not only would they present a monumental task in terms of cleaning; they would more than likely attract the unwanted attention of thieves and vandals.

The vinyl wrap however, offers a more practical solution to those wishing to change the appearance of their car. Most vehicle would wear the cherry red wrap, as featured on the Dodge Viper, very well. However, a large proportion opt for a vinyl finish do so for business purposes as a form of advertisement through the use customised, branded graphics. Whether for business purposes or for upgrading your vehicle’s design, the film, when fitted correctly, can be beneficial in terms of protecting your paintwork from chips, scuffs and scratches. They are also reversible, so you can return to your car’s former paintwork after.