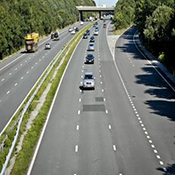 For the first time since the law was changed in 2013, a motorist has been fined Ł1000 and 5 points on his license after being caught as a middle lane hogger on a busy motorway. Middle lane hogging has been identified as a real problem which causes motorway capacity to be wasted, causing congestion, traffic delays and accidents. The government had issued on the spot fines of Ł100 as a way of deterring drivers from staying put in the middle lane.

The driver was stopped by police in West Yorkshire, after persistently refusing to move out of the central lane on the busy M62. Like many drivers, this particular driver had many opportunities to change lane but refused every opportunity to do so. Leeds Magistrates’ Court heard that the driver was driving in an ‘inconsiderate manner’ for many miles, causing an inconvenience and potential danger to other drivers. Police who had stopped the driver were forced to brake and overtake the driver to force him to pull over.

PC Nigel Fawcett-Jones from the Road Policing Unity of West Yorkshire police had stated that hogging in the middle lane was a dangerous activity to participate in and said ‘it reduced the capacity of roads and motorways, and can lead to dangerous situations where other drivers tailgate the vehicle in front to try and get the lane hogger to move over.’

Since publically convicted, many road users have welcomed the news despite figures last year showing few fines and few drivers being caught. Many road users blamed the police for failing to enforce the new law. A representative from the AA said ‘drivers will be saying Hallelujah that finally someone has been prosecuted because lane hogging causes a huge amount of frustration. This also sends a message out to drivers who think they can get away with it that the police are clamping down.’

A poll from more than 2000 drivers found 43% of hoggers said they drove in the middle lane as it was an easier way to drive. The Direct Lane research disclosed the worst stretches of motorway middle lane driving in England: