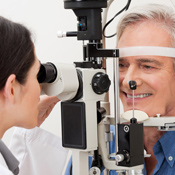 A road safety charity has called for current laws to change so that sight tests for motorists become mandatory. Brake has launched a new campaign which urges the government to bring in new legislation. In a survey, there was widespread support for the scheme, with Brake saying that hundreds of fatalities could be avoided if people’s sight was regularly checked.

In research, it was shown that poor driver eyesight contributes to at least 2,900 casualties every year, many of which are fatalities. Under the current system, someone’s vision is only tested momentarily on their driving test, after which, they’re never tested again. And, whilst people are supposed to inform the Driver and Vehicle Licensing Agency (DVLA) of changes to eyes, many don’t. In a survey, it was shown that 87 per cent of those questioned support the need for eyesight examinations at least every 10 years. Conducted by RSA Insurance Group and Specsavers, the survey also revealed that 12 per cent of drivers who know they require glasses have driven without them in the past 12 months. Meanwhile, one fifth put off visiting the optician, despite noticing a difference in their eyes, whilst 4 per cent (over 1.5 million drivers) have never had an eye test.

The need for better laws was highlighted when bride-to-be, Natalie Wade, was killed by a 78 year old motorist with poor vision. Ms Wade, 28, was out shopping for a wedding dress in 2006 when she was knocked down by a driver who, not only was blind in one eye, but had 40 defects in the other. Ms Wade suffered severe brain damage and was placed in intensive care, only to die on Valentine’s Day. Since then, her family have been campaigning for the laws to change, with Reverend Brenda Gutberlet, her aunt, saying, “To get behind the wheel of a vehicle unable to see shows a disregard for the lives of others and it can’t be right that we still allow drivers to do so.”

For motorists up and down the country, it’s an important reminder that it’s essential to keep a close eye on vision and ensure that changes are identified. Regardless of whether drivers have personalised number plates or a traditional reg, road safety must be a top concern. This means people must have their eyesight checked regularly and notify the DVLA if any worrying changes which could affect their driving status are identified.

It’s been revealed by Prime Minister David Cameron that plans are afoot to allow...

When the BBC announced none other than loveable F.R.I.E.N.D.S star and ...