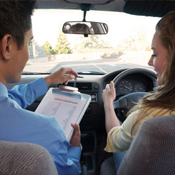 Many drivers will look back upon their days of learning and their test, in particular, with a degree of anxiety. Taking driving tests can be a scary event for many people, even for driving test examiners. However, examiners can breathe slightly more easily as the Driving and Vehicle Licensing Agency (DVLA) revealed that few tests are ending in a crash.

Though many tests end badly because learners make several mistakes and don’t gain their pass certificate, some come to an altogether scarier ending as motorists actually crash their vehicles. With nerves being heightened, it’s easy for things to go wrong, but sometimes it happens on a grand scale. However, there seems to be some welcome data, after the DVLA said the number of crashes occurring on tests had actually fallen by 22 per cent in 2013 when compared against figures for 2009. In 2012, 700 learner drivers crashed whilst taking their test, showing a small gain from the year previously. However, in 2013, the number of crashes dropped to under 500. Meanwhile, in the first three months of 2014, there were just 20 collisions, suggesting that the overall figure for this year is likely to be dramatically reduced.

A spokesman from a leasing firm who originally requested the DVLA data said, “It’s hugely positive to see such a trend emerging in the UK’s learner driver industry. The fall in collisions during tests we’ve found reflects well on UK road safety and paints a positive picture for the future of motoring.”

There are several suggested reasons for the decline in crashes, including that driving examiners are taking action earlier on to prevent dangerous situations occurring. In addition, recent data suggested that more people are taking their driving test later in life, meaning that they’re more prepared for the road and less likely to have an accident as a result. This has resulted in less new motorists having their licenses taken away. With more care and consideration, driving safety is also set to improve over the coming years.

For drivers with DVLA plates, the news that fewer learner drivers are crashing during their test will be greatly welcomed. Whilst learners are easily discernible by the vehicle they’re in, it’s still important to provide them with plenty of room to manoeuvre. And, with the number of tests ending on a more positive note, motorists can look forward to a future where the safety on Britain’s roads is much improved.

Across the UK, many drivers are still coming to terms with the fact that paper t...