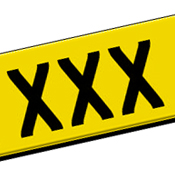 It’s been revealed that the Driver and Vehicle Licensing Agency (DVLA) have banned a number of plates that officials deemed too rude for the road. Many people up and down the country love their personalised number plates and have gone to great lengths, and expense, to get hold of a registration that means something to them. However, for motorists who’ve been awaiting popular registrations to come onto the market, such as VA64 ZLE, they’ll be disappointed after the DVLA announced that it, among others, had been removed and would not be for sale.

Personalised number plates can command an extremely high price, whether directly from the DVLA or via a private sale. In fact, the plate 1 D gained a DVLA price of Ł352,411 in 2009, whilst the private plate F 1 is currently on the market for Ł10m. It goes to show that many people will pay a lot of money for the correct plate. Registrations can be a great way to be a little flashy on the road, as well as show some personality. With the latter in mind, some might have been anticipating the arrival of a few risqué plates that would’ve made them, and other drivers, smile.

However, officials at the DVLA have now said that over 120 plates have been scrapped from the latest ‘64’ batch coming in September. Having hunted through the thousands of new letter and number combinations, several were identified as too rude and won’t make the roads. Some of the plates said to have been scrapped include DOG4 GER, R4NDY and SH64 GER. When the 2014 number plates were released in March, a number of other combinations didn’t make the grade either, including several that spelled out swear words.

But, motorists shouldn’t been too disheartened as whilst the worst offenders have been cancelled, there are still some cheeky registrations on offer. For example, UGO7 FAT, V14 GRA and PEN 15 are all still available. It seems odd that some of these plates have passed the official inspection process, with expert Angela Banh, saying “It’s strange how the banning process works. It’s a subjective topic.”

Buying a personalised number plate is still a great way to have a little fun on the road without putting lives in danger and simply embellishing a car in a great way. With many slightly risqué and cheeky options available, there’s still a chance to cause a few smiles on the road.