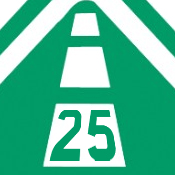 For 25 years, the Driver and Vehicle Licensing Agency (DVLA) have been selling personalised number plates. To celebrate their newest anniversary, the agency is enjoying a special auction in South Wales where many of the plates on offer have Welsh themes.

Over the past quarter of a century, the DVLAs private registration number sales have raised over Ł2bn for the UKs Treasury. Whilst many plates are sold for only a few hundred pounds, others receive a lot of interest and have sold for upwards of Ł100K. At the latest auction, which is being held at the Vale Resort, its hoped that around Ł4m will be raised.

Of particular interest was a personalised plate spelling the name of Craig Bellamy, a Welsh football legend. The BELL AMY combination was sold on the first day for Ł19,520 when Richard Bellamy, a furniture importer based in Nottinghamshire, won a tense bidding session at the sale. Mr Bellamy travelled to South Wales specifically to attend the auction and didnt come away empty handed. Winning the plate for Ł15,000 and then having to pay fees on top, he explained the plate would be attached either to one of his company cars or his Porsche Panamera. This was near the limit of what I was prepared to pay. I have about half a dozen similar plates but this one is as near as I can get to my name, he said, adding, Im very pleased. I dont intend to sell the plate, but if Craig Bellamy were to give me a call, I would have a chat with him about it. I have two children so I could pass it on to one of them.

The BELL AMY plate was one of the first to go under the hammer, with several more registrations being sold throughout the three-day event. Other plates of specific interest are 25 0, a representation of the worlds most expensive car, the Ferrari 250 GTO, and MC14 REN. Theres also quite a Welsh feeling very apt for the location of the sale, with plates 11 FAW, 11 WRU and WEL 55H all going under the hammer.

2020 doesn’t seem too far away when you think about how much ther...