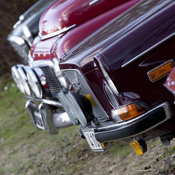 The Goodwood Festival of Speed returns on June 25-28, playing host to multiple vehicle debuts, motorsport stars and classic cars. This year’s theme is ‘Fast and Fearless: Racing on the Edge’, and the festival will be celebrating many anniversaries including the 90h anniversary of the inaugural motor racing World Championship won by Alfa Romeo as well as marking 50 years since Honda’s first grand prix victory.

The Goodwood Hillclimb is one of the most famous events at the festival with eighteen vehicle manufacturers taking part, including the newly restored Fiat S76.

In 1911, unofficially declared the fastest car in the world and dubbed as ‘The Beast of Turin’, the Fiat S76 is making a remarkable return to the festival after 100 years since it was last driven, having undergone a 10 year restoration.

The S76 was only produced twice by the Italian manufacturer, with an aim to claim the records for the flying kilometer and flying mile from the Blitzen Benz race. Having achieved the mile record with Petro Bordino at the wheel at Saltburn Sands in 1911 and recorded at over 135mph on a kilometre attempt at Oostenede in Belgium, the car was denied the record as it did not complete a return run within one hour.

Fiat dismantled one of the cars after the First World War to prevent competitors snatching its mechanical secrets and in 2003 Duncan Pittaway, brought the chassis back to the UK and brought it back to life with the original 28.5-litre, four cylinder engine from the dismantled car.

The return of the vintage classic car epitomises an era that celebrated motor racing, with the persistence and determination to battle out fearless competitors and rival manufacturers to drive hundreds of miles across cobbled roads to set a record time.

Other vehicles confirmed for the festival are from the likes of Benz, Darracq, Mercedes, Metallurigique-Maybach, Mors, Napier and Sunbeam.

Have you bought your tickets yet? Let us know what you’re most excited to see at this year’s festival.

It’s been revealed that motorists are to be affected by road tax changes that wi...