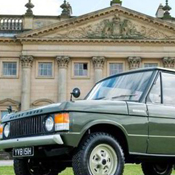 The first ever Range Rover to come off the production line has been auctioned off, selling for Ł115,000. While this is a large sum, it’s actually Ł25,000 less than expected, meaning the new owner got the car for a bargain sum.

Made in Solihull towards the end of 1969, the Range Rover, which is chassis number one, still has its original engine, axles and gearbox in place. The historical vehicle was lost for some time when it was bought many decades ago. It lost its iconic green paintwork after being sprayed gold, and has its number plate changed to a private reg. Rediscovered after many years, it was gradually rebuilt and lovingly restored to its former glory. Since 1991, the vehicle had been displayed in Huddersfield’s Land Rover Centre with visitors able to enjoy seeing the motor in the official showroom.

Talking about the Range Rover’s life over the past few years, centre manager, Mark Griffiths, said that apart from a few video promotions and photo shoots, the car had remained on site. “Im one of the few people whove driven it in the last 23 years, its probably done less than 100 miles. Its a little bit agricultural compared to the modern day models but it was so advanced for its day and its still really drivable.”

Since being restored to its former glory, the original Range Rover has been fitted with its first registration number, YVB 151H. Mr Griffiths revealed that over the years, it’s been a great talking point for the centre, with many people undertaking their own vehicle restorations having come and taken a look. It’s enabled others to talk to the experts, take photos and finish their own vehicles off to a spectacularly polished level too. “Ive sold thousands of cars in the years,” Mr Griffiths said. “Ive been here but this time Ill be very sad to see it go.”

When news of the Range Rover’s sale first emerged, it was suggested the vehicle could make over Ł150,000 when it went to auction on September 4th. Nick Whale, managing director of Silverstone Auctions’ Salon Prive sale where the car was sold, previously said, “These cars are incredibly popular and we expect a significant amount of interest when it goes under the hammer.” Despite the interest in the Range Rover it didn’t sell for quite as much as expected, meaning it’s new owner got a piece of history for an extremely good price.