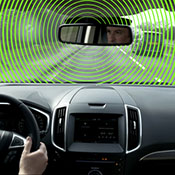 Speeding drivers is one of the main causes of accidents on the roads, because of this Ford are going to release a system that adjusts the speed of a vehicle when it spots speed signs, to reduce the number of accidents and fines due to speeding. They say that this technology will reduce the stress of driving and will ensure drivers remain under the speed limit.

Ford have created speed limiting technology that can be activated by the steering wheel but it can be suspended by the driver pressing the accelerator to the floor.

The Intelligent Speed Limiter combines two existing technologies. Adjustable speed limiters – sensors that are placed in the wheels to detect how fast the vehicle is going. If the vehicle is over the pre-set speed, technology then limits the amount of fuel that goes to the engine to slow the car down. They do this instead of applying the brakes because it is safer and unlikely to cause accidents. The system can be over rode by the driver placing their foot firmly on the accelerator if they need to overtake or avoid an accident.

Traffic signal recognition is the second technology also used in this process. A forward facing camera is mounted to the windscreen, it scans the environment for road signs and alerts the driver of its presence. Drivers can set the system to allow them up to 5mph over the speed limit.

Some drivers have their reservations about giving up control of the vehicle but others see it as a positive way to avoid speeding fines and it may mean better road safety.

What do you think? Will you be getting a new Ford when they come out?