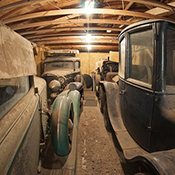 ‘It’s the Holy Grail for a car guy’, explains Antonio Brunet, chairman and founder of Motostalgia Auctions in Austin, Texas. Five classic pre-war automobiles have been found after being kept hidden for over four decades in an Austin Barn.

The classic car collections features three Cadillacs built between 1932 and 1938, a 1923 electric model and a 1908 REO Model G Boattail Roadster. The collection has an estimated value at $700,000 and is expected to sell for its value. The cars are owned by a man who moved to Texas from Wisconsin in the 70’s who intended to restore the cars but never had time. Antonio Brunet will now help achieve their asking price at an auction.

The auction is scheduled to take place June 12 at Indianapolis Motor Speedway and the 1932 Cadillac 370B V-12 Convertible is expected to fetch as much as $350,000, which will be the highest valuation at auction. This Cadillac is one of only four Victoria convertibles built for 1932 which features a V-12 engine instead of the famous Cadillac V-16.

Would you buy one of these cars to restore to its former glory?

Over the past few months there have been numerous warnings from official bodies,...

Car Insurance Premiums Rise to a Whopping Ł481; a 9% Rise

The Association of British Insurers (ABI) has today released the

Across the UK, many drivers are still coming to terms with the fact that paper t...