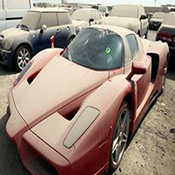 Whilst most cities suffer with some form of clutter or rubbish issue, Dubai’s ever-growing litter complaint is more than a little bit unusual.

It’s no secret that Dubai and the whole of the United Arab Emirates have a serious penchant for the latest in high end luxury cars. In the past, newly wealthy foreigners (mostly British ex-pats) poured money into Dubai’s booming property market, splashing their cash on only the best Italian sports cars as comely embellishments to complement their lavish driveways.

But as the whole world knows all too well, the credit crunch came along to bring everyone down to earth with a bang. The once pronounced capital of property has gone into a state of crisis, taking its resident millionaires down with it. Extortionate debts and unpayable loans mean wealthy property moguls - once drivers of the latest and greatest in automobile technology - are now facing crippling debt, and the visible manifestation of this is nothing short of shocking.

Visit Dubai International Airport carpark and you’re likely to find the sleekest sports cars, unrecognisable, covered in dust and abandoned. More often than not the extravagant vehicles come with apology notes and loan documents strewn across the windscreen and keys still in the ignition. Panicked ex-pats drive their cars to the nearest airport in a debt-fuelled panic and hop on a plane to fly off into the sunset – abandoning their financial problems and their cars in one slick move.

Even the most exclusive cars are finding it hard to escape this fate; just last year one of only four hundred manufactured Ferrari Enzo’s was seized by police after spending the last months of its life accumulating a coat of dust in an empty carpark. Along with millions of other high end cars abandoned by flustered owners, the Enzo went to auction to be sold at a discounted price.

Although not an obviously antisocial issue, angry residents have been known to complain about the dirty cars cramping their opulent ‘yacht-club’ style.

We’re more than happy to take one for the team…