When it comes to celebs, business moguls, footballers and socialites, there’s one thing that springs immediately to mind: Cash – lots and lots of it.

Their financial success is made an exhibition of with fat leather wallets, diamonds, lavish mansions and, arguably some of their most outlandish purchases of all - driveways lined with extraordinary cars.

If you’ve ever tried googling ‘Celebrities’ and ‘Cars’, you’ve probably been greeted by images of Porsche’s, Lambo’s, and Ferrari’s (to name but a few). However, if you thought all of the lucky loaded few preferred exorbitant motors to bog-standard run-arounds – you thought wrong.

Seems some of the richest young things favour a humble hatchback to an extravagant sporty piece, and we have to say, we kind of rate them for it... 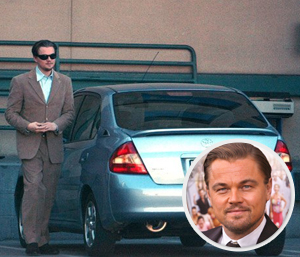 Yes he’s still yet to win an Oscar, but Leo has been on Hollywood’s hot radar ever since he broke hearts all over the world with a baby faced performance in 1997 blockbuster – Titanic. So does he own a Ferrari, Lambo, even a Merc? Nope. Environmentally conscious DiCaprio gets himself from A to B in 4-cylinder Toyota Prius Hybrid, instead. Ok, the Prius starts at £12,750, so not dirt cheap - but you’d think a movie star of his standing would loosen the purse strings a little more? 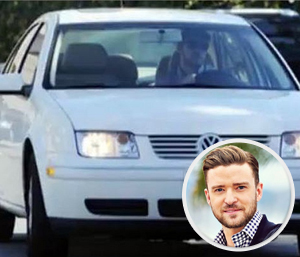 He’s young, hot and minted (his net worth currently stands at 200 mil) – but this singer, actor and Hollywood Hottie gets around in a rather practical set of wheels - a fourth generation, white Volkswagen Jetta. We can’t help but think he does it on purpose – after all – what better way to escape being noticed and chased by adoring fans when running errands? Clever. 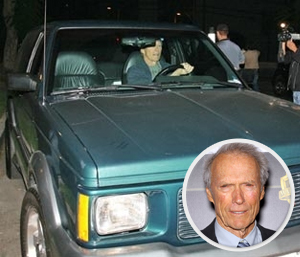 With one of Hollywood’s most successful and longest spanning careers (50 years to be exact) – we’d expect Mr Eastwood’s ride of choice to be equally impressive. In reality, Clint bowls around in a 22 year old GMC Typhoo worth a meagre £20,000. And it’s one of the most un-anaesthetic shades of green we’ve ever seen… 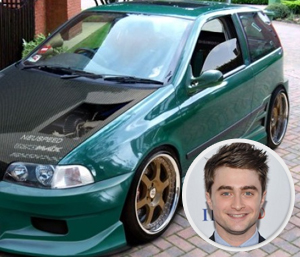 When it comes to Mr Radcliffe, ‘rich’ simply doesn’t cover it – this is a guy who had millions saved before his 18th birthday. But what did the star of Harry Potter treat himself to upon coming of age? A Bentley? Bugatti? Aston Martin, perhaps? No, no, and hell no. Daniel actually shelled out £11,600 for a sensible Fiat Punto. Reportedly the reason behind his practical purchase was his penchant for saving the environment – the tiny 1.8l Fiat will do wonders for reducing Dan’s carbon footprint, at least… 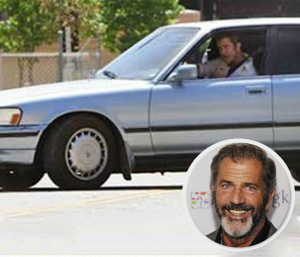 The ‘Mad Max’ star has driven his fair share of powerful cars on screen, but off screen the A list celebrity opts for something a little more understated – namely a silver sixth generation Toyota Cressida. The exact year of the model is unconfirmed, meaning the car could be worth anything between £200 and ten grand. So he hasn’t exactly splashed out, either way... 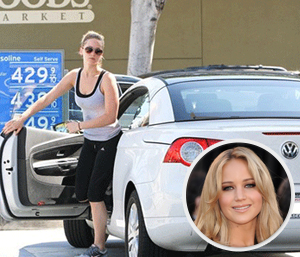 Ever since the ‘Hunger Games’ hit the big screen in 2012, J-law has been the most popular woman in Hollywood – with a pay check to match (we suspect). Her car of choice - a Volkswagen Eos – tells a very different story. Granted, it’s not the ugliest car on the road, and is still worth a good £23,000– but come on Jen, you could easily own a car ten times the price! Guess she’s too busy winning Oscars to care… 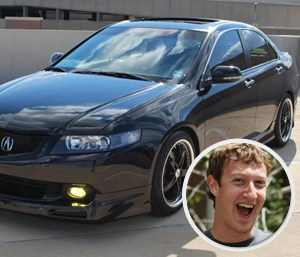 One of the ‘World’s Most Influential People’ with a net worth of $26 billion probably drives a suitably excessive car, right? The billionaire business man behind the phenomenon that is Facebook (who’s also had a film made about him – FYI) doesn’t drive a Ferrari, Porsche or Corvette, oh no. Instead, Mark is the proud owner of a very modest Acura TSX worth £20,000 – basically change in the bottom of his pocket.