All bus lanes across London have blue signs indicating their times of operation. With timings of operation typically enforced throughout the morning rush (06:00am – 10:00am), hectic school/work journey home (15:00pm – 19:00pm) and some even for 12 (07:00am – 19:00pm) to 24 hours straight – drivers illegally using a bus lane between the restricted timings, could face a penalty charge notice.

And whilst drivers should understand when to use and not to use the bus lanes, it can be difficult to dodge a penalty notice. Here are the London boroughs with highest and lowest number of bus lane penalty charge notices in 2016-17.

Utilising the latest data derived from London Councils, motoring specialists Click4Reg, sought to find out the number of penalty charge notices that had been issued by London councils to road users for bus lane infringements in April 2016 – March 2017. 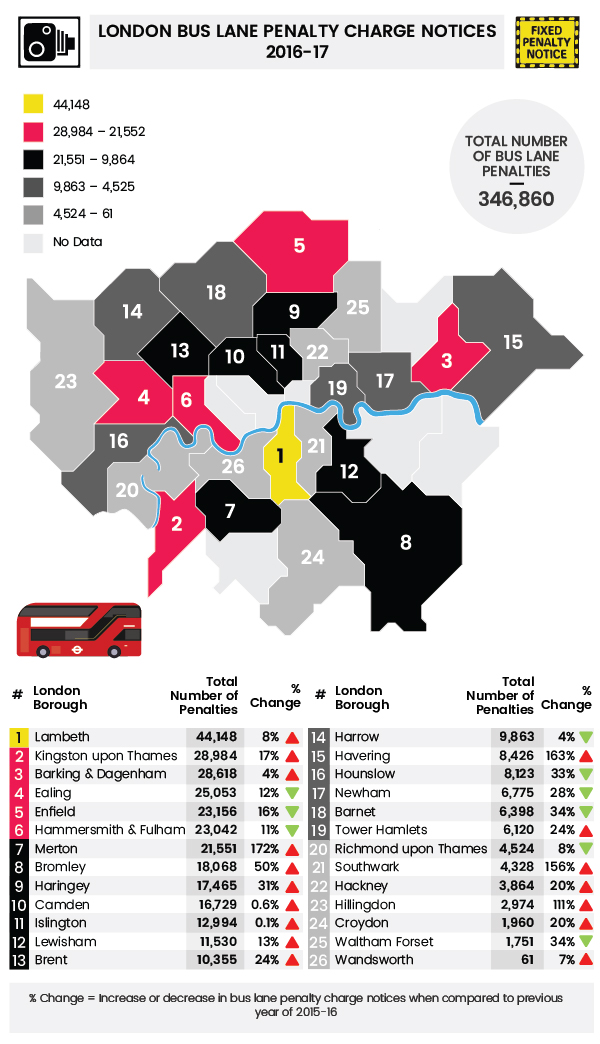 Click4Reg found that Lambeth council issued the highest number of bus lane penalty charge notices in London, at an astonishing 44,148 – the equivalent of 121 penalties every day. Lambeth was followed by Kingston upon Thames, where the council handed out 28,984 penalty charge notices for bus lane infringements – a 17% rise from the year before (April 2015 – March 2016 = 24,674).

On the other end of the scale, Wandsworth council issued the lowest number of bus lane penalty charge notices in London, at just 61. Slightly above, Waltham Forest council gave 1,751 penalty notices to road users who had misused bus lanes in their borough – a 34% decrease from the previous year (2015-16), where there were 2,636 fines.

Upon further analysis, Click4Reg can also reveal that the south-west London borough of Merton had the biggest percentage increase for year-on-year bus lane penalties at a shocking 172%. Figures for 2016-17, indicate there were 21,551 penalties compared to 7,919 the year before. Contrastingly, Barnet and Waltham Forest equally saw the highest percentage decrease for year-on-year bus lane penalties at 34% respectively.

Collectively, a grand total of 346,860 penalty charge notices were issued by 26 London councils in 2016-17; astonishingly, the equivalent of 950 bus lane penalties per day in the capital. 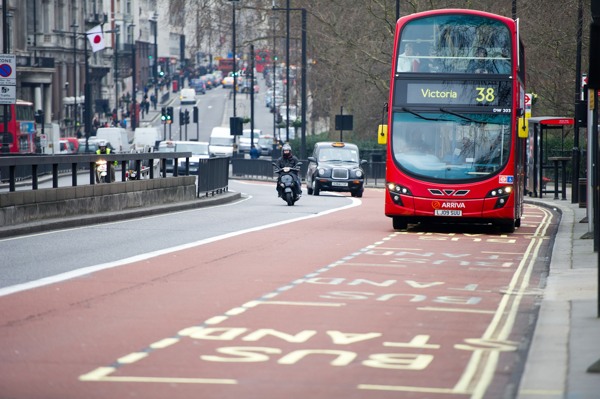 Click4Reg’s top five tips for drivers on how best to deal with bus lanes:

Don’t assume – If you’re driving and see a vehicle go into a bus lane, don’t automatically do the same thing. They themselves may not be aware of the correct hours of operation, where all vehicle types are allowed to use the bus lane, without getting caught.

Plan ahead – With the internet enabling drivers to easily check routes before setting off, it is easy to check the restrictions on bus lanes. Once you have figured out if you're able to use a bus lane on route, it makes life easier if you encounter traffic.

Recognise markings – In the case you have trouble identifying bus lanes, remember, dashed white lines or a solid white line clearly show the beginning and end of bus lanes. Moreover, the inside of a lot of bus lanes are painted a light burgundy to differentiate them from normal grey roads.

Understand signage – All bus lanes are recognisable through blue signs. These blue signs contain the days and times in which the bus lane is in operation and during these defined points. So to avoid any misinterpretations, make the effort to fully learn and understand what the numbers, words and logos mean.

Back to basics – Refresh your memory and knowledge of the latest Highway Code. This will extensively cover all the correct information on bus lane rules, markings and signage. And above, don't speed. Not only speeding is a waste of time and money, it also makes you more likely to make a mistake.