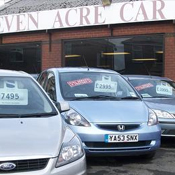 The latest figures have shown that new car registrations rose significantly in March 2014, with numbers rising by 18 per cent when they’re compared against the same period in 2013. Last month, a total of 464,824 cars were registered. That’s almost 15,000 a day and is the highest level for almost 10 years. With many new cars on the road, it also means there may be more people on the hunt for personalised number plates.

March’s figure was one of the two highest registration months since 1999, the other being in March 2004. The month’s rise in registrations also means that 2014’s got off to a great start, with 13.7 per cent more cars sold since the start of the year when compared against the first three months of 2013. Overall, 688,122 new vehicles have been registered and are now on the road.

Britain’s trade body, the SMMT, said that the movement in the market was an extremely positive sign for the current confidence in Britain’s economy, particularly as over 50 per cent of the recent purchases were by private buyers. Mike Hawes, chief executive of the organisation, said, “New car registrations surged 17.7% in March to 464,824 units, a surprisingly strong level of growth and a reflection of intensifying consumer confidence and the availability of great new products. Given the past six years of subdued economic performance across the UK, there is still a substantial margin of pent-up demand that is contributing to a strong new and used car market.”

Though March has become one of the market’s traditional registration high points, the sector expect growth to continue rising throughout the year. Mr Hawes explained that with attractive finance deals, there’s never been a better time to buy a new car. With this in mind, he expects the sector to continue growing at a modest rate for the remainder of the year.

Ford Fiestas remain the best-selling vehicle, with March noting 25,753 vehicles sold. The next vehicle, 58 per cent below the Fiesta, was the stablemate Focus, and beneath that, the Vauxhall Corsa, with 16,860 and 16,231 vehicles sold respectively. The VW Golf, Vauxhall Astra and Nissan Qashqui were also popular models.

With such a peak in car registrations being seen, many people might also be on the look out for personalised number plates. In addition to having a brand new car, getting a private reg is a great way for owners to take even more pride in their vehicle.

Learner Drivers Take to the Motorway

From Monday 4th June 2018, learner drivers will be able to take driving lesso...