McLaren launches their cheapest car yet for Ł145,000 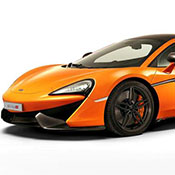 McLaren are set to launch the first of a new sport car range in hopes it will double their yearly sales. The new two seater sports car will reach 204mph and have a road price of Ł145,000. This car will be followed by another model which supposedly will be Ł20,000 cheaper.

McLaren said the 570S Coupe “introduces McLaren race-derived technologies and design values to a new segment and audience”. Meaning that the new design should hopefully target non racers and work with British streets.

The 570S was shown to press back in January, it was understood that photos were banned during the presentation but some have surfaced. The cars sleek body work and gullwing doors makes it look like its big brother McLaren F1.

McLaren CEO Mike Flewitt said that he expects double figure growth as the more affordable McLaren makes them an option to the rich and the superrich.

This price will put McLaren as the lowest priced supercar in the UK, cheaper than the lowest cost Ferrari, the California T and puts the super car just above the Porsche 911 meaning that it’s the bestselling car in its price range.

Following closely behind is Aston Martin who has recently been taken over by Nissan’s executive Andy Palmer to turn around the company. The market for ultra-premium cars is increasing. Analysts at IHS auto motive expect sales in the sector to triple by the end of the decade compared with figures in 2010.

Let us know what you think in the comments below!