Offences involving powered two-wheel vehicles, such as scooters and mopeds, have skyrocketed in London over the last few years, and more noticeably since the beginning of this year. Currently, the crime wave is largely confined to the capital, with a staggering 54 victims being targeted per day. Police fear that this rise in crime will soon become an epidemic and spread to the rest of the UK. There are two parts to this fast-emerging crime trend: the theft of the scooters themselves and the offences for which they are used for.

Click4Reg, analysing figures released by the Metropolitan Police Service, finds that thefts of powered two-wheel vehicles have increased by almost 30%. Between July 2016 and July 2017, 14,943 thefts were recorded – the majority being scooters – which has almost doubled since 2013. 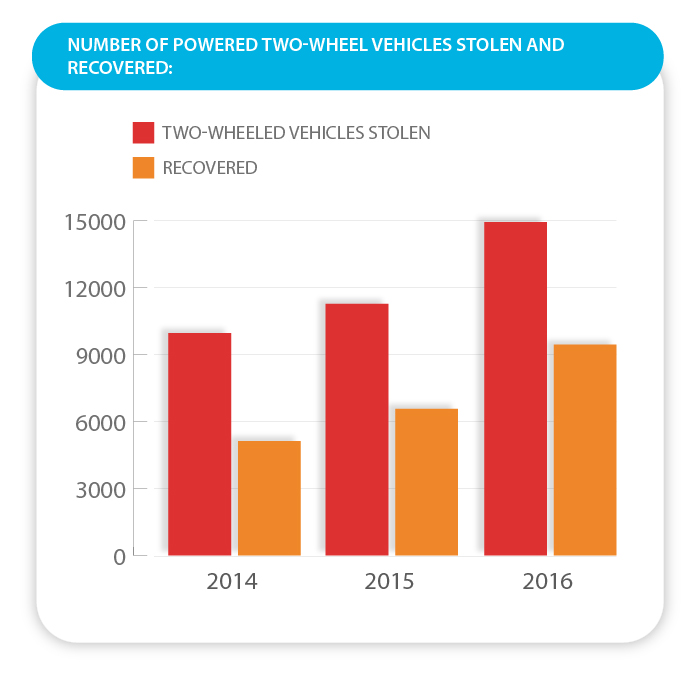 According to the Motorcycle Industry Association, around 60% of all recorded bike thefts in the UK were in London last year. Statistics show that just under 10% of all motorcycles and mopeds licenced in the UK were registered to those living in the city. Arguably, the rise in thefts have been sparked by an upsurge in the stock of scooters available, particularly in London.

As the capital is becoming increasingly congested and insurance is becoming increasing more expensive, powered two-wheel vehicles have grown considerably in popularity. This is not only by inhabitants and commuters, but by businesses too – delivery drivers and couriers are often seen on motorbikes now.

In a MET report, police are telling owners of powered two-wheel vehicles to take care. The London police force have suggested:

-    Park in a designated parking area with a stand and security loop
-    Use disc and chain locks
-    When leaving your motorbike somewhere for a long period of time, consider locking it onto something secure, such as railings
-    Use audible alarms
-    Mark your bike with the vehicle identification number (VIN) your postcode or registration number using an ultra-violet pen to make it easily distinguishable

Over the last year, the number of crimes involving powered two-wheel vehicles has more than trebled. In the 12 months to the end of June last year, the Metropolitan Police registered 16,158 crimes involving mopeds and scooters compared with just 5,145 the year before. The most common offences were found to be robbery and theft, with mobile phones making up over 90% of the items stolen. Police have called for people on the streets to be aware of their surroundings at all times to avoid thefts taking place, including not texting whilst walking and calling on hands-free mode. 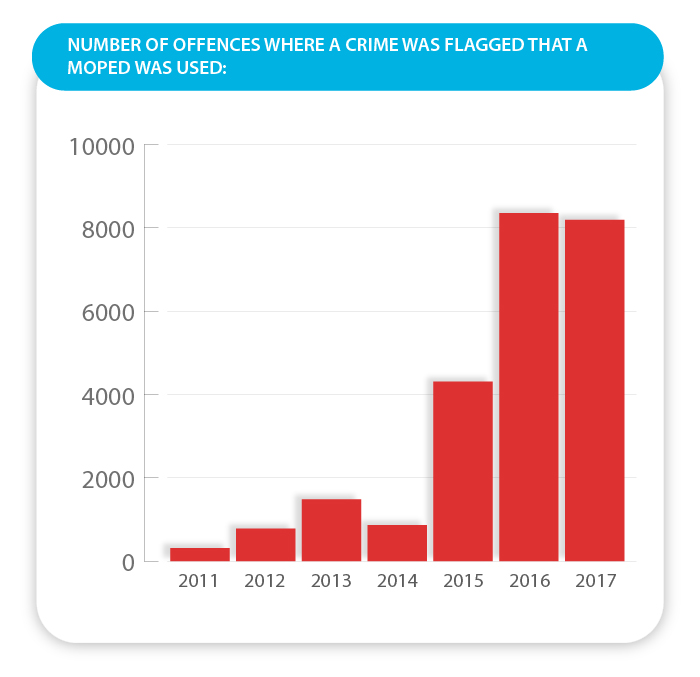 If offences carry on at this rate, London could see a total of 19,660 crimes by the end of the year.

Phones are simple to steal and can easily be reset within minutes and sold on. This is becoming increasingly popular amongst gang members around the country. Thieves are stealing mopeds, and wearing gloves, helmets and visors to protect their identity. It’s hard to distinguish any features and the crime is over in a matter of seconds – the police are finding it incredibly difficult to track down offenders.

Here is some personal crime prevention advice from the Metropolitan Police:

-    Be aware of your surroundings at all times
-    Keep your personal property secure
-    Don’t text whilst walking – you won’t notice potential thieves approaching you if you’re preoccupied
-    Use security features from your phone
-    Try going hands-free and using earphones, or walk away from the roadside
-    Make sure all security features are enabled on your phone to avoid thieves from accessing your personal information
-    Find out your IMEI number and keep it written down in a safe place – if your phone is stolen, give the number to the police and call your mobile provider to block it
-    Register your phone on immobiliser.com to help police return recovered stolen property and combat the sale of stolen goods