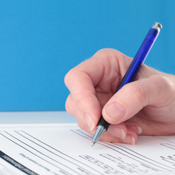 The Association of British Insurers (ABI) has said that thousands of people lie on their application forms in a bid to get cheaper cover. Last year alone saw 180,675 fraudulent insurance submissions, and these were only the ones that were actually detected.

The ABI has highlighted the essential need for all drivers, including those with personalised number plates, to offer full and frank answers to questions so they’re correctly insured.

Car insurance is mandatory for all those on the road, but it can be expensive, resulting in drivers trying anything to get the costs down. This is particularly true for new drivers who don’t have years of experience to get low premiums. There’s been a rise in tracking boxes that are fitted to cars and provide data on people’s driving, distance and speed. However, many people don’t want to take advantage of these. Instead, they lie about unspent convictions and previous claims when taking out new insurance protection.

Talking about how some try and attempt to get cheaper cover by lying, the ABI’s Aidan Kerr, said: “Industry initiatives, such as the Insurance Fraud Register and the soon to be available MyLicence initiative that will address non-disclosure of motoring offences, will make it harder than ever to deceive to try and get cheaper motor cover.”

The MyLicence scheme has been created as a way for the insurance industry to gain data from the Driver and Vehicle Licensing Agency (DVLA) about previous penalty points and motoring convictions. It means they’ll no longer have to rely on people’s honesty, and can get accurate, reliable figures instead.

In recent data it was shown that the premiums for motor insurance have been falling. In fact, a 5.6 per cent decline for driving expenses in the second quarter of 2014 was revealed by the British Insurance Brokers’ Association (BIBA). This will be seen as good news, particularly by critics of the Ł11bn motor insurance industry in the UK. Previously, the sector’s been heavily criticised for challenging the current premium system, suggesting they’re too high and not in motorists’ favour.

Regardless of whether this is true or not, cover is essential and a legal requirement for anyone getting behind the wheel of a car. It’s vital for everyone to have insurance and to have been honest on their application forms. This should serve as a reminder to be transparent about previous penalty points and convictions so that whatever insurance is bought, it’s effective and valid.

Take a look into these luxury horse lorries

With equestrian professionals having aimed to make their mark throughout the ...