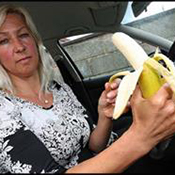 We all know the standard rules and regulations that need to be followed when behind the wheel: No drinking (alcohol), texting or talking on the phone. (Smoking and overly loud music are generally frowned upon too…)
But mother of one Elsa Harris got quite the shock earlier this week when she was pulled over and consequently fined Ł100 for grazing on a banana whilst driving in Christchurch, Dorset.

The police car was seen flashing its lights at Elsa, then proceeded to drive in front of her and slam on his breaks.

"When the officer got out he was really angry from the offset, but I was still completely unaware I'd done anything wrong.'

Miss Harris admits to eating the banana, however claims it was mostly peeled before she had started her journey, and only a small amount of skin remained.

The policeman however saw things differently, claiming Miss Harris was driving with both hands off the wheel, and therefore without 'due care and attention'. She refuses to accept this was the case.
Miss Harris was taken into the back of the police car “like a common criminal” and reprimanded about the dangers of careless driving. She is said to be outraged at the fact that you hear many reports of drunk driving, and countless people texting and talking on their mobile phones whilst in charge of a vehicle, yet she was cautioned for eating a banana in a traffic jam.

Miss Harris was given a Ł100 pound fine and the choice of either 3 points on her license or a driver’s awareness course – it is not yet known which one she opted for.

There is no specific offence for eating whilst driving, however as aforementioned, driving 'without due care and attention' can constitute eating, amongst other things that could be deemed as detrimental to your control of a vehicle. A Dorset police spokesperson said: "If a person has been reported for a driving offence that they do not feel they are guilty of, the matter will be referred to the magistrates' court for a decision."

At Ł100 pounds, we just really hope she enjoyed that banana…