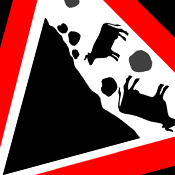 In the latest survey, data was collated from 29 police forces, approximately 2,000 drivers and the DVLA. A number of shocking attitudes towards driving and road laws were revealed, making many experts keen to express the dangers of not heeding signs. For example, one third of drivers on the road don’t know that a white circle with black stripe indicates motorists must adhere to national speed limits. Meanwhile, a seventh of people think signs for a slippery road actually indicate there’s ‘paint on the road’.

In the past year alone, 1,340,680 drivers have gained penalty points or were completely disqualified from driving. The DVLA also said speeding offenses totalled 818,768, meaning that 2,243 offences occurred every day. In the past decade, one fifth of motorists have been caught speeding and received penalty points, with 13per cent of these people gaining at least nine points during this time. The degree to which people speed is quite shocking too, with 36per cent of people saying they always speed in a 30mph zone, with the average speed being 38mph. Meanwhile, 32per cent speed in 40mph zones, with speeds averaging 47mph, whilst 43per cent of people go over the limit in 70mph, with the average speed being 81mph.

Whilst the DVLA introduced speed awareness courses as a way for people to avoid gaining penalty points if they’re caught speeding, over one quarter of drivers say they’d rather keep their points than attend such a course. However, ironically, just 5per cent of those attending awareness courses are ever caught re-offending, showing that the system does work. Finally, one in every four drivers has either crashed their car or had a near miss as a result of speeding. These DVLA figures were backed up by data from the government, which showed 4,745 crashes directly resulted from speeding; equal to 13 crashes every day during 2012.

Brake’s senior campaigner, Gary Rae, said “These are worrying findings”. The official from the road safety charity added “The research suggests a significant proportion of drivers seem to think it is okay to break the laws of the road. It can never be acceptable and we urge all drivers to respect road safety laws and recognise that such laws exist to help save lives. Speed limits are just that – a limit – not a target to exceed.”

Buying a car can be a complicated process at the best of times, so knowing wh...