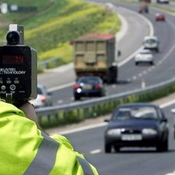 New figures have shown that many police forces across Britain are cracking down on driving offences, despite many experts believing it doesn’t necessarily make the roads a safer place. An operation across Scotland, Police Scotland, set a high target of 123,332 road offences for the first nine months of the scheme; 2,466 higher than during the previous period. Whilst driving safely should always be of great importance for drivers, both those with traditional registrations and personalised number plates need to check their speeds and ensure they’re staying within the law.

In an official report, it was shown that police are being handed stiff targets to crack down on minor offences. However, some say this is in the place of dealing with serious crimes. As part of the Police Scotland drive, the HM Inspectorate of Constabulary said that thousands more people are being caught because they’re not wearing their seatbelts or are speeding. However, they urged that the targets culture shows little evidence of making the roads a safer place, adding that it seemed “easier for officers to pursue minor offences…than more complex crimes, and to abandon their professional discretion in how they might deal with these incidents”.

In the initial nine months from April 2013 when the targets were put in place, those being caught for speeding rose by 37 per cent. However, it was discovered that the death toll on Scottish roads actually grew too, by 14 per cent since the targets were introduced last year. The spike in those being charged for speeding grew after police chiefs decided to set high targets in a bid to gain an 11.5 per cent rise in the number of speeders being caught and fined. However, there have been concerns that the public is being alienated by the approach. Chief Constable Sir Stephen House was heavily criticised for having more armed officers conducting routine policy and a higher amount of young people subjected to stop and searches. Alison McInnes, the Lib Dem justice spokeswoman explained the force is “rapidly moving from a community-focused, locally responsive service to a centralised, impersonal enforcement agency who authorise the carrying of sidearms. It is no wonder people are unhappy”.

For all drivers, the latest reports are yet another reminder that care must be taken to stay within the speed limit when driving. With officers increasingly unable to use their discretion, particularly due to high targets, the instances of people getting off with only a warning is likely to fall.

The popular Scunthorpe Telegraph Motor Show has been held, drawing crowds to Nor...