The new car market is currently thriving in the UK, as the Society of Motor Manufacturers & Traders (SMMT), found the new car market grew by 8.4% in March alone. SMMT exists to support and positively promote the needs and interests of the UK automotive industry in the UK and abroad.

Their latest figures suggested that March has become the biggest month for the automotive sector, with 562,337 cars registered in one month. This figure is more than double the number of cars registered in the first two months of the year combined. Registrations of new cars also increased by 6.2% in the first quarter of 2017, amounting to 820,016 units; a new record quarter. 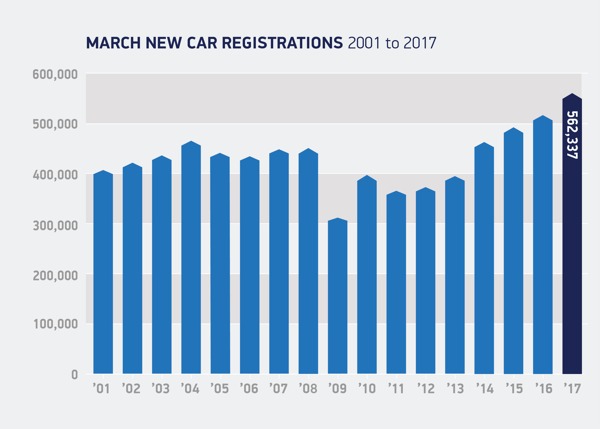 This record breaking performance for new UK cars comes as buyers are taking advantage of the chance to purchase a car before the new vehicle excise duty (VED) rates came into enforcement. The VED came into effect 1 April, with new tax bands coming into existence. The current rates now ensure that the majority of new cars are subjected to a typical increase in their first year tax demands, after which a flat rate of £140 will apply after every year. However, it must be noted that cars with zero emissions are exempt from the charge.

The report by SMMT also stated that the number of diesel cars sold in March was a lot more than any other month. Nearly one quarter of a million car buyers opted for diesel cars in March, whilst there was a 31.0% surge in registrations of alternatively fuelled cars. Likewise, petrol cars saw a significantly notable uplift, by 13.2%.

Mike Hawes, chief executive of The Society of Motor Manufacturers and Trades commented on the research:

“These record figures are undoubtedly boosted by consumers reacting to new VED changes, pulling forward purchases into March, especially those ultra-low emission vehicles that will no longer benefit from a zero-rate fee.”

Despite this unprecedented and phenomenal surge in new car sales before the new tax rates came into effect earlier this month, many are still worried regarding an economic uncertainty related to Brexit and the future for the car industry, which could put the brakes on sales. A chief UK economist at HIS Markit stated that, though the sales throughout March was ‘impressive’, it could also be a ‘last hurrah’ for the sector.

“There was clearly a considerable lift to sales coming from both consumers and businesses bringing forward car purchases before VED changes,” he said. “It looks odds-on that the squeeze on consumers’ purchasing power will deepen appreciably further while businesses will face increasingly challenging and uncertain conditions which may well cause them to be more circumspect in replacing their car fleets.”

All data and graphics credit to: smmt.co.uk

There have been further calls for mandatory competency checks on elderly drivers...