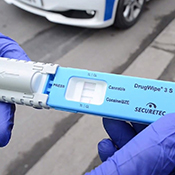 New Drug Drive laws mean you could be charged for having high levels of prescription drugs in your system.

A new law was introduced on the 2nd of March 2015 establishing new legal limits for intoxicating substances in the blood system in England and Wales. The law includes sixteen different substances, eight are illegal drugs and eight are legal prescription drugs. This new law makes it easier for Police to catch and convict offenders. A drug drive conviction includes a criminal record, a minimum of twelve months driving ban and a fine of up to Ł5000.

It is now illegal to drive with a specific controlled drug above the accepted limit in the body. The medicines which are included in this are Clonazepam, Diazepam, Flunitrazepam, Lorazepam, Methadone, Morphine, Oxazepam and Temazepam. If you take any of these medications, as long as you are taking them as directed you are not breaking the law. As a backup it is a good idea to have your prescription or pill bottle roadside in the case of being pulled over. If you feel that your driving abilities are impaired it is important not to drive and speak to your GP.

The Police have road side testing kits but they can only detect Cocaine and THC the main psychoactive ingredient in Cannabis. However if the Police feel you are under the influence of drugs they can take you to the station for a blood test.

The first arrest under this law was completed on the 5th of March only a couple of days after it had been released. A nineteen year old driver was arrested on suspicion of drug driving after a collision in Wales. No one was injured but the driver failed the roadside drug test and was taken back to the station for a blood test. It is unclear what the results were of this test but let’s hope if the driver was over the legal limit he received the consequences of Drug Driving.

Sergeant Jason Diamond of the Roads Policing Unit said: “Whilst this is the first arrest under the new law, it won’t be our last. Our message remains the same – don’t get behind the wheel under the influence of drink or drugs. It’s not worth the risk.”

Will this new law improve the safety on the roads? Do you take one of these controlled drugs, are you worried about being pulled over and possibly convicted?

Let us know in the comments!