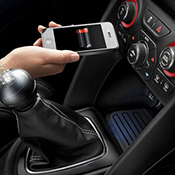 Technology seems to be taking over the world and the latest development comes from German carmaker Daimler and manufacturer Qualcomm who are collaborating to develop brand new technologies which will enable mobile devices to be charged wirelessly.

Announced on the weekend, this is not the first time Daimler and Qualcomm have formed a partnership. With experience behind them having worked together to provide Mercedes AMG Petronas Formula One team with sensor based devices, the move initiates a push by Daimler, a holding company of Mercedes-Benz to propel their expertise in telecommunications and software to establish a competitive reputation as a High-Tec carmaker.

The project is exploring ways customers can wirelessly charge devices, whilst using a high speed 3G/4G connectivity. In a joint statement, both companies agreed ‘it’s important that we remain on the cutting edge of technology and continue to deliver unparalleled experiences to our customers’. The most viable way of doing so is to use Qualcomm’s Halo Wireless Electric Vehicle Charging (WEVC) technology which can be built into individual parking slots so vehicles can charge wirelessly. Alongside Halo, WiPower, also provided by Qualcomm will allow wireless charging as long as the device is placed within the charged area. This will open the project to not only charging phones but smartphones, watches and tablets.

Daimler is in a bid against Audi and BMW to be the best at developing technology such as this. Companies such as Daimler and Qualcomm are willing to maintain a working relationship to succeed in this highly competitive field which sees major car manufacturers fighting for Nokia’s mapping technology.