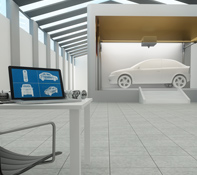 3D printed cars are now being developed and a prototype has been shown at the 2015 Detroit motor show. Arizona-based start-up Local Motors will be the future of car buying in the US. The company was founded in 2007 and made history in September as it revealed the world’s first printed Car. This 3D car may be released to the public this year.

Local motors are inviting interested drivers to register their interest ready for the launch later in the year. Currently the price is estimated to be between Ł11,900-21,100 depending on optional extras.

Currently they are keeping tight-lipped about styling details, but we do know that the exterior and parts of the interior are being printed using a process called BAAM (big area additive manufacturing) which is used for large scale 3D printing. ABS plastic is used, which is reinforced with carbon fibre to add strength.

The process of printing the car takes 44 hours at the moment, but Local Motors believe they can get this down to about 24. This technique could change how we buy cars and other goods in the future. Local Motors want to build 100 microfactories around the world, which could produce less waste, lower distribution costs, get item to market faster and provide more local jobs.

When these cars are finally released they are likely to draw huge interest. What better way to show off your 3D printed car than a personalised registration? There are a few New Style Private Registrations that could be added to this printed car including; PR12 TED, PR15 NTR, PR14NTR, AND PR13TER.

It’s been announced that those suffering with diabetes may soon be able to exten...