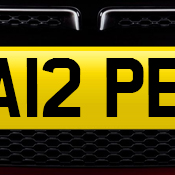 Its been revealed that a three day Driving and Vehicle Licensing Agency (DVLA) number plate auction raised almost Ł15,000 for one plate alone. The private reg, which spells out HA12 PER, received a lot of interest into the build up to the auction which was held near Daventry. Finally, on the day, an electrician from Deanshanger snapped up the licence for Ł14,600.

The Daventry license plate auction had around 1,500 products on offer, which ranged in value from a few hundred to several thousand pounds. A lot of interest had been noted for the HA12 PER plate, with some believing that the Beckhams might even be interested in snagging the plate which bears a resemblance to their fourth childs name, Harper. Before the birth of their child, just 24 children were registered with the name for the 12 months previously. However, this dramatically rose after the youngster, now two, was born as people wanted to associate their family with the name.

The personalised registrations event manager for the DVLA, Jody Davies, explained, While Harper is a long established surname, clearly it has risen in popularity as a first name over the last couple of years. Incredibly, you cant get any closer to it than the HA12 PER registration we will be auctioning.

Though a reserve price of Ł1,000 was put on the plate, it went for a lot more. Mark Harper, a 52 year old electrician, had already shown interest in the piece but wasnt expecting to get close to buying it, with predicted values soaring. Mr Harper believed that the private reg would not only be a fantastic heirloom for his family, but would be an ideal addition in helping to promote his business, Harper Electrical Services.

Speaking of the prospect of getting the plate, Mr Harper explained that his entire family love personalised registration and that when he saw HA12 PER was being auctioned, he desperately wanted it. That said, I really didnt believe I would be in with a chance to buy it as I expected it to fetch a far higher premium, especially because of rumours suggesting the Beckhams would be bidding for their daughter, Harper!, he added.

The sale shows just how much people are willing to bid for the right piece. Alternatively, if specific plates arent already in existence, individuals can pay to get their own custom reg created, allowing them to take even more pride in their vehicles.

The Futuristic Contraption that Stands to Eliminate Rush Hour Traffic!

China are known for their weird and wacky inventions, but we have to sa...

Driverless cars have been a hot topic in the news recently, with MCITY, the worl...