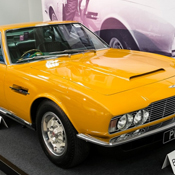 Most keen TV viewers of the 1970s will almost certainly remember The Persuaders; a popular television show was that was certainly full throttle and had explosive action. It has now been revealed that the classic Aston Martin that was showcased in the drama - complete with its personalised number plates - is to be sold at auction. If you are interested the guide price will be around Ł500,000.

The classic yellow Aston Martin DBS with boot signatures from the co-stars, Tony Curtis and Roger Moore, is to be sold to the highest bidder on May the 17th.

The customised car quickly became one of the iconic images from the television show and helped the programme become one of the most expensive shows to produce of its time. This was largely due to the fact that the car and the cast were often taken to extremely glamorous locations for filming.

Though Tony Curtis loved his orange Ferrari, Roger Moore desperately wanted to have an Aston Martin DBS for the show, which was happily supplied by the British car manufacturer. It came complete with the private plates BS 1; a nod to the lead characters name of Brett Sinclair (Roger Moore).

During just one episode titled The Gold Napoleon - as the Aston careered around the roads in some exotic locale - the original UK plates of PPP 6H were displayed instead of BS 1.

Before the show started filming, the classic car was customised, having its V8 engine stripped away and replaced with a four-litre straight six unit. V8 wheels, V8 badging and hubs were also added to the car to complete the now famous look.

Despite the shows popularity, Moore was lured away after 24 episodes to play the part of James Bond. However, in those 24 episodes the car certainly was put through its paces, covering 5,000 miles before Aston Martin sold it on to its next owner. Since then, the classic has had five owners and has been quite a star itself at many of the worlds most glamorous automotive shows, including Lake Comos 2013 Concorso dEleganza Villa dEste.

When the hammer comes down in May the purchaser is likely to have paid well in excess of the guide price. Tim Schofield from Bonhams auction house said: The car is in wonderful condition, it was restored around 20 years ago by Aston Martin and has been beautifully maintained. The car is linked to a well-known personality and TV show and we are expecting a lot of interest in it.