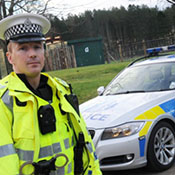 British police are due to start using a system that links traffic cops to the DVLA database.

This new procedure has been introduced to try and combat drivers giving false names and addresses. The Police will be able to pull up driving licence photos on their mobile devices or in car computers and they then can check if the driver’s face matches the ID photo.

Currently if drivers get pulled over there is no way to check if their information is correct. If they give a name and there is no criminal record logged they get lost in the system. If the case goes to court, the legal system cannot track the false name and it wastes time and money. Meaning the offender has got away with it.

This pilot scheme will go live by the end of the year with Surrey Police already on board. If it proves to be successful the process will be going nationwide.

The new scheme will stop offenders trying to cheat the system, because if the drivers face does not match the name they have given action can be taken. It also gives Police more time to combat other crimes.

Supposedly drivers will be given a chance to change their details if they give the incorrect name, but if they continue to give wrong information they will be charged for giving a false identity to the Police.

Hopefully this new scheme will work and stop drivers getting away with crimes they have committed. If drivers have committed an offence they should have to pay for it, not sneak their way out.

What do you think? Is this new scheme a good idea?