Potholes these days seem to have become a persistent fixture for most drivers during their journeys. Recent research by Britannia Rescue found that in Britain potholes take up a total area of 295 square miles (764 square km). Astonishingly, that is more than twice the size of Isle of Wight. Whilst most drivers recognise what potholes are, many do not truly recognise the consequence of driving over them. We have sourced some useful information about how potholes are formed, the significance of the risk they pose to cars on the road and most importantly how to avoid them at all costs!

How do Potholes Form?

All roads gradually worsen over time. The surface of the road progressively crumbles because of natural weathering, which in turn results in cracking and allows water into the road surface. During winter, frequent cycles of thawing and freezing (commonly known as ‘freeze-thaw’) of the water under the surface leads to expansion. This cycle repeats time and time again, resulting in the pothole to keep increasing in size.

The Significance of Potholes

Entering or hitting a pothole can damage a driver’s vehicle. Pothole damage is a common road hazard and can be a challenging one at that, as a potholes presence may not always be obvious. The degree of damage greatly depends upon the pothole’s depth and the speed upon impact. If a driver just catches their vehicle in a pothole, the damage would in most cases would be minimal; perhaps a flat-tyre or rim damage.

On the other hand, if a driver were to hit a deep pothole at high speed they could potentially knock their vehicle out of alignment and even cause damage to their suspension. These types of damage may not always be clear to see and could prove costly as well as problematic in the long run. 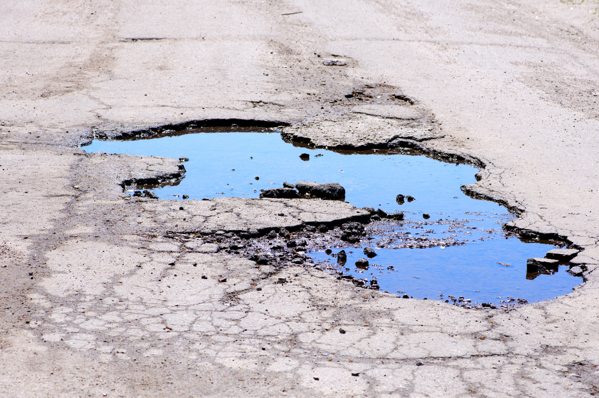 The Signs of Pothole Damage

Tyres: Most common signs are flat tyres and uneven tyre wear. Tyres sidewall can also swell, if wheels forcefully ram into a pothole.

Rims: Aluminium rims are vulnerable to dents. If a vehicle hits a deep and wide pothole at a high speed, their rims could potentially end up being out of shape (e.g. bent or crooked).

Undercarriage: Hitting a pothole can dent or even puncture the undercarriage of a vehicle. Unattended undercarriage fluid leaks and wear lead to rust formation, overtime some internal parts may not only be come defective but could be very expensive to replace.

Wheel Alignment: The steering wheel being crooked whilst the vehicle is going straight ahead is the most obvious indication that a vehicle is in need of a realignment. A vehicle pulling to one side whilst driving is another sign. In extreme cases, the vehicle will try to turn to one side or the other.

Suspension: If a vehicle is starting to feel slightly bouncy or rough, this points to the suspension, and will need to be checked. Additionally, potholes can also cause the suspension of a vehicle to protest loudly in the form of squeaking.

The “Body Roll” Motion: Body roll is a term which is used to describe how the body of a vehicle feels based on overall movement. If the suspension of a vehicle is starting to go bad, the body (even on the slightest turns) will have a leaning feeling.

According to research carried out by vehicle breakdown service Britannia Rescue the most common vehicle problems due to potholes are tyre damage (43%), damaged suspension (34%) and damaged wheel rims (26%). 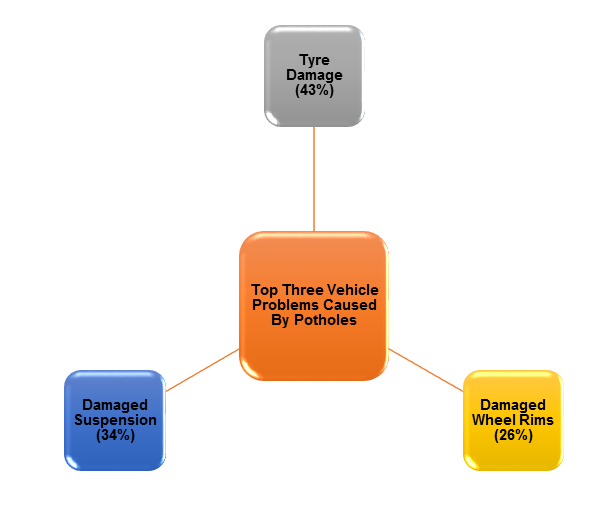 How to Avoid Dreaded Pothole Damage

Maintaining adequate distance: Leaving enough space between an individual’s car and the vehicle in front of them is fundamental. In doing so, an individual is more likely to spot a pothole before they wreak chaos to an individual’s vehicle.

Taking precautions during incremental weather: During uneasy weather conditions such as heavy rain and snow, it is difficult to judge the depth and size of a pothole or even see it at all due to lower visibility. When driving during such conditions, it is best advised to proceed at a reduced speed. The extra caution would not only help drivers identify potholes but also other driving hazards before they cause any momentous damage.

Avoid braking unnecessarily: Drivers should try not to apply brakes when driving over potholes. When an individual applies their brakes they tilt their vehicle forward hence apply more stress on the front suspension. Braking over a deep and wide pothole especially could be very detrimental for a vehicles front suspension.