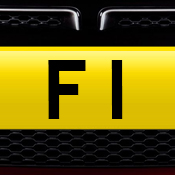 It might seem like an astonishing price, but the private reg of ‘F1’ has gone on sale for Ł10m. In an almost unbelievable twist of fate, the plate, bought for Ł440,000 just six years ago, is now back on the market and is commanding a price never before seen for a single registration. It’s the highest amount ever asked for a plate, and far exceeds all previous sales totals for the DVLA’s personalised registrations.

Afzal Kahn, a car-tuning tycoon based in Yorkshire is the current owner of the F1 private plate which is currently attached to his Bugatti Veyron hypercar; a vehicle that’s estimated to be worth at least one million itself. Having owned the plate for six years, Mr Kahn is now keen to sell, putting the registration onto the market for Ł10,009,995. Mohammed Bhana, the spokesman for Mr Kahn, revealed that an offer of Ł8.5m has already been turned down after a buyer from the Middle East showed their intent on procuring the plate. And, it isn’t only Mr Kahn’s F1 plate up for sale, but his entire number plate collection which includes 4HRH. This reg is currently going for Ł275,000; an optimistic price seeing as Ł215,000 has already been spent on a registration reading 1HRH.

The F1 plate was originally attached to a small and humble Volvo S80 that was utilised by Essex County Council’s chairman. However, in a bid to raise money that could be used to teach youngsters how to drive, the plate was sold in 2008 for Ł440,000. At the time, this was the record price for any plate, beating the previous Ł397,500 that had been paid for S1. Mr Kahn bought the plate and the money was used by the council for education initiatives.

Currently, the highest price ever paid for a personalised number plate directly from the Driving and Vehicle Licensing Agency (DVLA) is Ł352,411. This occurred in 2009, when the DVLA sold a plate reading 1D; synonymous with the extremely popular and world famous boy band One Direction and, as such, noting strong demand from many people. Since 1989 the DVLA has been selling plates, allowing drivers to take pride in the vehicles and add a little personality, all by using a few numbers and letters. Talking about the high value plates, a spokesperson for the organisation said, “We’ve cleaned out the cupboard of the high-value ones – once it’s gone, it’s gone.”

Whilst the majority of us drive daily without a problem, according to recent ...