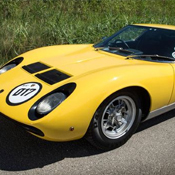 Its been revealed that an extremely rare Lamborghini that was formerly owned by Rod Stewart has appeared on the UKs Auto Trader website. Listed for sale at Ł899,999, the Lamborghini Miura P400S is a beautiful vehicle from the 1970s, and ideal for anyone wanting a classic car they can add private number plates to. Having been restored, the car is in gorgeous condition.

Bought in 1971 by rocker Rod Stewart, the Lamborghini Miura P400S is a two-door vehicle that has a top speed of 275km/h. At the time it was the fastest road car in the world, and managed to do an impressive 0-60 miles per hour in just 6.7 seconds. Having been completely rebuilt for a cost of around Ł100,000, the four-litre blue sports car is now in pristine condition. Stewart is said to have owned the car for five years, until selling it onto a private buyer. It includes two beautifully finished black leather seats, suspension upgrades, rear lights and the necessary front and rear clam modifications to meet todays driving standards. Extremely importantly for anyone wanting to buy a classic car, the Lamborghinis engine, chassis and bulkhead all bear the correct details and are, therefore, original to the vehicle.

Between December 1968 and March 1971, just 338 of these stunning vehicles were produced. Frank Sinatra is another celebrity famed for owning one, as is Miles Davis. Davis crashed his own car in October 1972, breaking both ankles and totalling the vehicle after reportedly taking cocaine. The Miura also found worldwide acclaim when it appeared in the opening few scenes of the classic 1969 Michael Caine film, The Italian Job.

As many might expect, the restored vehicle is on the market for just shy of one million pounds. For those wanting to own a stunning car and also a piece of history, its a beautiful piece to add to any motoring collection. Its also well worthwhile getting customised private number plates for the car, making it that little bit more special.

A spokesman from AutoTrader said, An old classic like this is rarely seen on the market now and particularly in such good condition for its age; all the love and attention has clearly kept it performing. This is a great idea if you do have 900k in your account. And soon enough one lucky sports car enthusiast will be able to add this historic celebrity vehicle to their collection.

6 Best License Plate Frames to Buy in the UK

In 1989, the first year the DVLA began selling personalised registrations, on...

Over the past few months, insurance costs for home and car cover has been droppi...