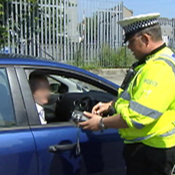 Being insured is a legal requirement for motorists, and for all those with or without private plates, it’s essential to ensure that protection has been taken out in case the worst occurs. Those on the road driving without insurance are not only breaking the law but put other drivers in a financially dangerous position because, should an accident occur, there’s no safety net in place. With this in mind, Staffordshire police have been cracking down on those without insurance in an effort to make the roads a safer place.

As part of their Cars Behind Bars campaign, it was revealed that police in Staffordshire have seized another five vehicles that were being driven without any form of insurance. The latest operation took place on Friday 23rd May and saw three arrests in addition to the cars being taken. Whilst one man was charged for suspicion of driving under the influence of alcohol, another was found to be wanted by Cheshire Magistrates Court because he’d failed to attend a court appearance. Meanwhile, the third individual was arrested for the UK Border Agency due to offences regarding immigration laws. In addition to the arrests, the police said over 30 drivers face appearances in court for a raft of driving offences, including not having insurance, having problems with their MOT or licence, having defective tyres or obstructing police investigations. Meanwhile, three people were also warned about having not updated their address with the DVLA.

Crime commissioner Matthew Ellis is the brainchild of Cars Behind Bars, and the scheme certainly seems to be working. Automatic number plate recognition software is being used by police patrols across the county in a bid to catch drivers who are breaking the law. Chief Superintendent Jon Drake said, “Everyday we take action to keep our roads safe and to target those involved in crime. It’s very clear from today’s operation that driving without insurance is often just the start when the patrol pulls over a vehicle and because of the highly targeted approach using Automatic Number Plate Recognition we can achieve a great deal very quickly.”

With the police in Staffordshire highlighting the importance of adhering to road rules, it’s vital for all drivers to have insurance. And, even for those without private plates, the use of number plate recognition tools means that no motorist will be able to elude police officials for long and could face severe penalties.