Vehicle crime has become a way of life for many opportunist criminals. It’s one of the most preventable crimes, yet many forget to take the right precautions to avoid becoming a victim. Here at Click4Reg, we decided to find the total number of vehicle crime cases that were reported to different police forces/constabularies across the UK in 2016 using data derived from data.police.uk. Vehicle crime according to the police data was classified as “theft from or of a vehicle or interference with a vehicle”. 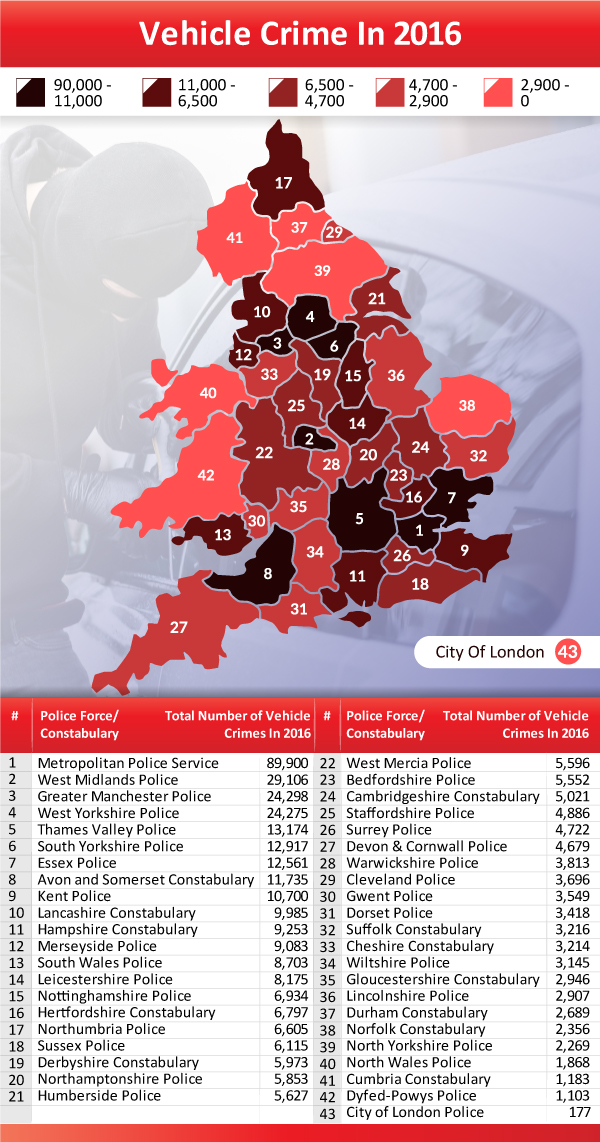 In terms of actual vehicles being stolen rather than the context of what’s inside them, vehicles valued between £1,000-£4,999 are the most targeted at 42%

Make every effort to close windows and fully lock the vehicle when leaving it on your own property, at work or elsewhere.

Remove all valuable possessions out of plain sight when not in the vehicle - such as mobile phones, car radio, wallets, purses, sat nav’s and any items of clothing. All of these items are attractive propositions for opportunist criminals and thieves seeking high-value items to capitalise on.

Always aim to park your vehicle in a well-lit area, as sufficient lighting will more than likely deter a criminals motivation to target your vehicle - particularly if you have any luxury car modifications, such as a personalised number plate.

Potentially invest in extra protection for your vehicle. A car alarm can go a long way in adding extra security to your vehicle. A steering wheel lock could also be an option, as they are often cost effective and easy to install.

If possible, try and avoid storing your valuable possessions in the glove box as well as the boot. Criminals and thieves are well aware posessions could be kept here, even if it is not visible.

If you’re making journeys to unfamiliar locations and sites, seek to plan ahead. In doing so, you can avoid going through and parking in high crime areas. Also beneficially find safer alternative routes to travel through.

“The figures are certainly fascinating. Vehicle crime is certainly more prevalent than anyone would expect. Whilst unfortunate, there are various effective actions that drivers can take to safeguard their vehicle from any potential crime. All drivers should aim to make simple steps such as locking doors and removing all valuable possessions when not in their vehicle a habit. Making such behaviours a daily routine, will go a long way in protecting driver’s vehicles from opportunist criminals and thieves. Overall, more awareness and precaution from drivers can go a significantly long way in reducing the numbers of vehicle crime across the UK”.