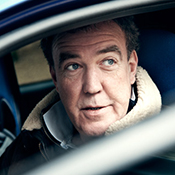 Jeremy Clarkson is in trouble yet again. Usually he gets away with it with a slap on the wrist but now the BBC have suspended him after an apparent altercation with one of the show’s producers.

Sunday’s episode of Top Gear will not be aired and it has been revealed that the final two episodes of the season may be dropped also. With Top Gear being one of the BBC’s most popular and profitable shows surely cancelling the end of the season is a bad decision for the BBC.

The incident was thought to have happened last week when the team were filming on location in Newcastle. Clarkson reportedly assaulted a producer who works on the show which the BBC have described as a ‘fracas’. The incident supposedly was about a lack of catering causing Clarkson to punch the producer involved.

Clarkson has not issued a statement but has been joking with his co-presents James May and Richard Hammond on Twitter about what film should be aired in Top Gear’s place. Clarkson has retweeted a comment from a fan of Top Gear on Twitter.

Can this be resolved without making the fans suffer? Asked about the Clarkson incident, co-presenter James May told BBC News: I think hes been involved in a bit of a dust-up and I dont think its that serious. He said he had not been present.

A petition has been started to ‘reinstate’ Clarkson which has already been signed by over 300,000 people.
Clarkson and his co-presenters are due to be touring the world for ‘Top Gear Live’ a stadium tour which as of yet has not been cancelled.

Clarkson is no stranger to controversy. Offending many people over the years on Top Gear. One incident including the abrupt ending of filming in Argentina when locals protested about a license plate on one of the vehicles chosen to be in the show. Which appeared to be referring to the 1982 Falklands War causing the cast and crew to flee the country.

With Top Gear reaching an estimated global audience of 360 million people. The BBC have a tough decision to be make about the future of Top Gear, with Clarkson having presented the show since 2002 and many fans only watching because of him, will the BBC have him back or suffer a huge loss of loyal fans?

What are your thoughts? Let us know in the comments below!

Its been revealed that a three day Driving and Vehicle Licensing Agency (DVLA) n...