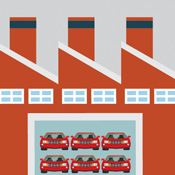 Several car makers have announced investments to boost the car industry in the UK to Ł1bn. Honda, Jaguar Landrover and The London Taxi Company have all announced their investments in the same week.

Honda have protected the future of their Swindon factory by declaring an investment of Ł200 million, this investment is to allow the UK factory to make one of Hondas most popular vehicles.

Jaguar Landrover said they will also spend Ł600 million at their West Midlands operations centre along with Ł400 million for the production of the Jaguar XF at Castle Bromwich.

The owner of The London Taxi Company has also revealed plans to invest Ł250 million to create low emission black cabs, meaning there will be 1,000 new jobs available in Coventry soon.

Honda will be spending the money to make five door versions of their popular Civic hatchback. Doing this will mean the Swindon factory will be a global production hub to distribute the Civic to Europe and other markets around the world. They say there will not be a growth in production but they may hire more employees in the future.

The chief executive Mike Hawes of the Motor Manufactures and Traders (SMMT) said “it has been a fantastic week for UK auto motive. Honda’s decision to build its next generation Civic, a global car in an important and growing segment, here in the UK cops off a record six days – the first time three manufactures have announced nine-figure investments over such a short period of time”.

Car makers have invested Ł7 billion in the car industry in 2013 and 2014. UK factories produced 1.5 million cars in 2014 and increase of 50% over five years since the financial recession in 2007. With personal loans and finance options available more and more motorists have been keeping the sales of cars in the UK high. As a result UK demand has helped make up for poor sales in Europe.

Paper Counterpart License to be Wiped Out

The paper counterpart license is due to be abolished on the 8th of June.The Depa...

Anyone who has a keen eye on private plates will be interested to hear that the ...