With the number of billionaires rising by 17% globally in 2017, it is only natural that the number of luxury car registrations increase too. However, with the rich being as much as 14% richer this year, we have witnessed an increased in so-called ‘super’ luxury cars. ‘Ultra’ or ‘super’ luxury brands include Ferrari, Bugatti, McLaren and Lamborghini; new registrations globally revealed a record number of 28,500 units registered. This was a double-digit growth for the market.

The UK isn’t doing too badly either, despite the Brexit fear. The Sunday Times Rich List revealed that there are now more billionaires living in the UK than ever before. Coincidentally, super-luxury personalised car registrations also reached record levels in the UK in 2016 at 4,600 units; an increase of 15.6% from the previous year.

Although being seen in a Bentley or a Bugatti may still carry a lot of prestige, Click4reg.co.uk’s study has revealed that status may not be the only reason for buying these brands. Looking at trends in certain luxury brands like Tesla, who specialise in electric cars and whose registrations have gone up by 75% from 2015, it can be deduced that drivers are in pursuit of the latest in innovation.

Or perhaps the super-rich are conscious about the UK’s recent announcement to ban diesel and petrol cars by the year 2040.

It would seem that luxury brands are ahead of the game when it comes to environmentally-friendly thinking. For example, Rolls Royce has said it is skipping hybridisation altogether to pursue purelyelectric cars instead, which Torsten Müller-Otvös, the CEO of Rolls Royce, commented was ‘the way forward’. Last year, Maserati forecasted the arrival of their first electric car model by 2020, and the CEO of Bugatti, Wolfgang Dürheimer, has stated that “electrification will happen.” Specifically, the Bugatti Chiron looks to be electrified to enhance its performance.

The colour of money

It was revealed that the nations favourite colour when it came to your average car was white, which had overtaken blue from the previous year. However there is certainly a difference in preferences when it comes to luxury and especially, super-luxury vehicles.

According to an FOI response from the Driver and Vehicle Licensing Agency (DVLA) released this July 2017, when it came to how the other half lived, it was revealed that luxury-car buyers often desire more off-beat, vibrant colours.  McLaren was most popular in orange (17% of all registered McLarens last year were in this shade). Perhaps even more predictable was the preference for red when it came to Ferrari (with a massive 44% registered in red), and almost 10% of all Lotus registrations were in the colour yellow.

However, the ever-sophisticated colour black still reigned supreme with most brands. It was also revealed that there was a predilection for gold, with 3421 units registered in this colour last year, perhaps more people are mimicking Saudi ‘playboy’ Turki Bin Abdullah, and his fleet of golden supercars. 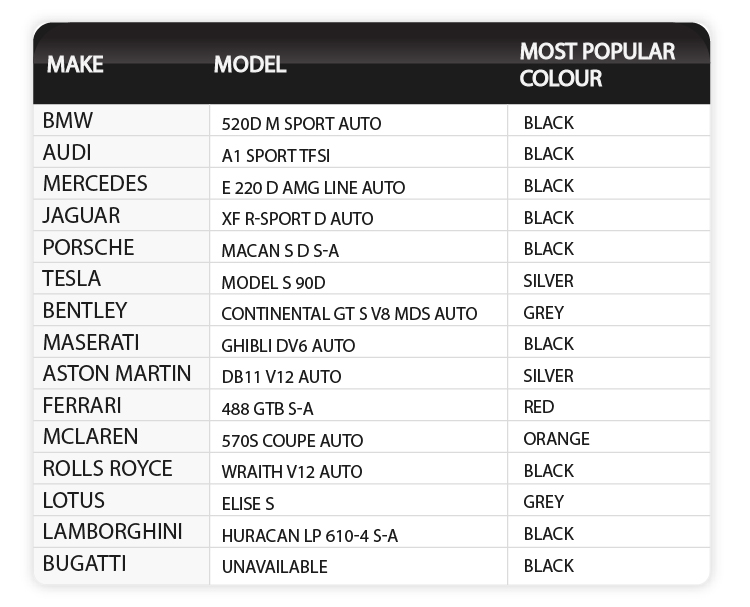 Of the luxury brands, Bugatti came out as being the rarest, with only 3 registered in 2016, and no information on what models these were.  British brands such as Rolls Royce, Jaguar, Bentley and Aston Martin proved popular with Brits, and accounted for 7% of luxury car registrations last year. Globally, British cars were performing even better, with Bentley alone accounting for 37% of total sales of super-luxury cars. BMW came out on top of the luxury registrations in 2016. At the lower end of luxury, BMW has been able to achieve mainstream success, especially with their 5 Series entry-level 520d, which was the most registered BMW of 2016. Indeed, the 5 Series has been named by What Car? as a consistent winner at their annual Car of the Year Awards.  It therefore comes as no surprise that BMW comes out on top. Perhaps more surprising are the registrations of super-luxury brands like Lotus, Bentley, Aston Martin and Maserati, which have enjoyed increased registrations of 35%, 30%, 20% and 17% respectively since 2014.