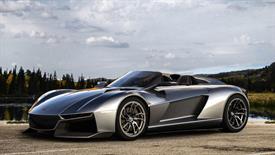 Fancy a million pound sports car for a tenth of the money? That’s what you’re getting with ‘The Beast’ according to automobile designer Fardees Rezvani – a steal at $139000 dollars - (apparently).

The luxury, carbon-fibre-bodied supercar not only looks the part, but goes from zero to 60 in an impressive 2.7 seconds. Its structural frame is based on the aesthetically incredible Ariel Atom, a high performance, road legal sports car originally produced in Somerset. Powered by a supercharged 2.4 litre, cylinder engine, the racer will yield 500 horsepower, a lot of turning heads, and serial cases of the green eyed monster.

But if you want to be a proud owner you’ll have to be patient; each car will be built-to-order and take 6-8 months for completion. Judging by its credentials though, the wait will be more than worth it. The fittingly coined ‘Beast’ was designed by automobile royalty, architect Samir Sadikhov. With an impressive amount of big names in his work backlog (he’s best known for his work on the Ferrari Xezri and Aston Martin DBC concept) Sadikhov’s design is going to be a sure-fire hit.

Why call it ‘The Beast’ you ask?

"To embody its pure brutal performance and acceleration numbers," Rezvani said. "There's no other way to say it."

Well, that told us.

And as for the $139000 dent in your wallet, fear not, you’re actually getting a bargain.

"This kind of performance level, and design, is typically reserved for cars that cost over $1 million dollars," Rezvani said. "Our goal was to make this available at a more reasonable price. World-class design doesn't have to cost $1 million."

And if your budget can’t quite stretch that far, they’ve even created a baby beast; the ‘Beast 300’ is a slight downgrade at $119000, with a lesser 2 litre engine and 315 horsepower it takes a whole 0.2 seconds longer to get to 60 than its larger counterpart. Still, we reckon it would do the job if we were late for work…

For the lucky few who already own an Ariel Atom, they can opt for a Beast shaped upgrade for $69000, or go for the Beast 300 option for $49000. Granted, seems a lot of money, but the company will shell out a free day at the racetrack if you’re willing to buy 500…