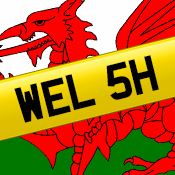 Personalised number plates are some of the most in-demand products, providing a status symbol for drivers and enabling people to add a little love to their car. Now it seems that Welsh motorists, in particular, are keen to showcase their vehicle, with many Welsh-themed plates making large amounts of money at auction. The nation’s last auction made a lot of money, with many people showing strong interest. Now, the next Nottingham-based auction has some new Welsh-themed registrations that are likely to receive a lot of interest.

For many people, buying a private plate is the ultimate status symbol; it’s a way to show off and advertise to other road users that they really loved their car. Over the past few years there’s been some extremely strong demand for such registrations, with a few plates selling for hundreds of thousands of pounds. For example, the letter and number combination, 25 O, was recently sold in Glamorgan for Ł518,000 in November, breaking all previous records. Other plates are also in strong demand and are, luckily, a little more affordable. This is especially true in Wales where, though the plates being sold might not top the charts, registrations remain in strong demand.

Speaking about recent Driver and Vehicle Licensing Agency (DVLA) auctions, the spokeswoman for Personalised Registrations, Jody Davies, said: “At our last auction, we sold RHY 1L for the hammer price of Ł1,200 and WRX 114M for Ł900.” The coveted WEL 5H plate was sold for Ł27,200 recently, whilst RH14 NNA and RH14 NON sold for Ł18,000 and Ł15,000 respectively. It just shows that when the right letter and number combinations come up for sale, there are many people around who are willing to pay thousands for them.

The DVLA often sell registrations at auction that have never been seen before. Though the dates of the organisation’s next Welsh-based auction hasn’t been set, those looking for Welsh-themed plates will welcome news that there’ll be some popular registrations at the next auction. This will be held in Nottingham between February 25th and 27th. Some of the plates likely to see interest include DYII LAN and G422 ETH, set at Ł900 and Ł200 respectively. Meanwhile, 222 GAV has an estimate of Ł1,600 upon it, whilst ENII GMA and BYR 2ON have estimates of Ł900 and Ł450.

For those wanting to start the New Year off in style, buying such a plate will be a way to ensure 2015’s one to be remembered.

Vehicle crime has become a way of life for many opportunist criminals. It&rsq...

In recent weeks there’s been increasing concern that private reg and Driving and...