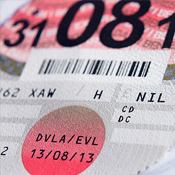 A new survey has revealed that half of all motorists have no idea that in six weeks, traditional tax discs will be eliminated. From October 1st, paper tax discs will be abolished, with the system moving online instead and replaced with electronic records. For all drivers, including those with personalised plates, it’s important to know the legislation surrounding car ownership so fines and fees can be avoided.

Websitemoney, a comparison site, conducted the poll on drivers and found that 50 per cent had no idea changes were imminent. Almost one third said they wouldn’t even bother to research the new rules, whilst 6 per cent thought the new changes weren’t coming into effect until 2015. Meanwhile, one third said they’d do nothing until they had official correspondence from the Driver and Vehicle Licensing Agency (DVLA).

Editor in chief at the comparison site, Hannah Maundrell, explained, “Changes to the vehicle tax system are no bad thing and we fully welcome the introduction of direct debit payments, particularly for consumers who may be struggling to keep up with the soaring cost of driving. It will also help to eliminate the problem of people who genuinely forget to renew their tax and end up being stung with a hefty fine. However, I suspect the new system may experience some teething problems so drivers really need to make sure theyre on top of their game.”

After 93 years of having paper discs, the move to a digital system has been created to provide drivers with more flexible ways of paying. In addition, with number plate recognition systems and digital records, it’s hoped that the numbers of people evading paying tax will fall. Overall predictions have suggested that Ł10m could be saved annually for the taxpayer. Noteworthy changes are that tax will no longer be transferred when selling a car. Instead, any full months will be refunded to the seller. The seller also has to inform the DVLA about the change of ownership; otherwise they face a Ł1,000 fine. In addition, vehicle tax, parking fines and speeding tickets will correspond to a vehicle and not the driver, so if a change of ownership hasn’t been informed, sellers could bear the brunt of their mistake.

One popular change is that tax can be paid by direct debit, with people choosing to pay monthly, twice a year, or the full amount. However, those not choosing the annual option will incur a 5 per cent surcharge, though this is less than the current 10 per cent surcharge for six month payments.

The rules regarding car tax have changed, and as of October 1st, tax will no lon...