The definition of road rage explains it as “a situation in which a driver becomes extremely angry or violent with the driver of another car because of the way they are driving”.

A recent report by the Department for Transport revealed that over the past three years, over 5,283 were either killed or injured through aggressive driving, which could have been caused by road rage. However more often than not, road rage simply results in a few heated exchanges between drivers, perhaps followed by some aggressive hand gestures, physical threats or dangerous driving methods.

According to the AA, road rage doesn’t have an ‘official’ status, due to the fact there is no specific offence named ‘road rage’. The term therefore doesn’t appear in The Highway Code, nor is it included in annual road traffic reports.

Although road rage is something a lot of drivers can relate to, it can sometimes escalate into potentially dangerous circumstances. As a result, motoring experts Click4reg sought to discover what you should do if you experience or witness road rage, and how to report road rage to the authorities. According to the Drivers and Vehicle Licensing Agency (DVLA) if you see dangerous driving of any kind, whether that be driving under the influence, or someone who appears to have little awareness of the road and others around them, it is important that you report the road incident in order to prevent something potentially fatal happening.

So, how to report road rage or dangerous driving?

The DVLA has a section within their website that allows you to fill in an incident form, ensure that you provide as much information as possible to report the road rage or general bad driving by license plate, including; the make, model and colour of the car, where you witnessed the incident and any details about the driver. You will also be asked to provide your details, but these will remain confidential and will not be shared with any third parties, it is just to ensure the DLVA can get back in contact with you if necessary. Alternatively, you can report the driving incident completely anonymously by phoning 08444530118.

You can also report the road rage incident to your local police and they will pass on the report to the DVLA.

Ask the Police states that driving mistakes such as pulling out too soon are minor faults, although they are annoying everyone has been guilty of doing it at some point and so retaliating will only make matters worse. Suggesting that if you are ever in this situation, you should try to remain calm and concentrate on your own driving to ensure your safety. However, if you are involved in a serious incident or one is ongoing, and you fear your safety call 999.

When it is safe to do so, make notes on the incident, ideally as soon as possible so that your memory of events does not fade. In doing so you can ensure the report is as accurate and detailed as possible. It is also important that you calm yourself down and try to recover from any shock you may have experienced. 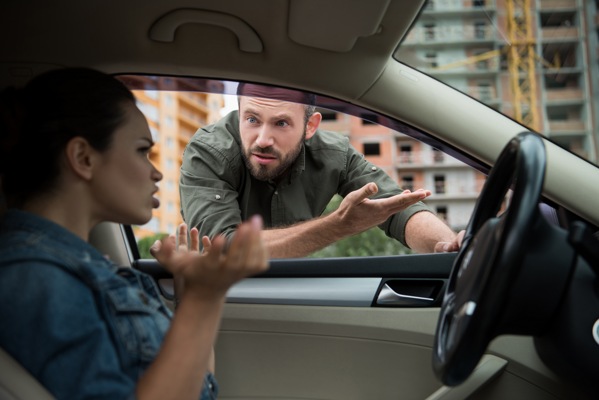 How to report non-emergency traffic incidents:

If you experience or witness any non-emergency traffic incidents and crimes it is important that you dial 101 instead of the emergency services. The following are examples of incidents that would require you to call 101 in order to prevent an accident or injury:

What is the road rage law in the UK?

The current UK law does not define any specific road rage offence and therefore the penalty that a dangerous driver could be charged with would depend on what their rage drove them to do.

A driver could also be charged under the Public Order Act 1986 if they caused harassment, alarm or distress to others road users.

Angry drivers could be fined up to £1,000 for something as small as a rude hand gesture and could lead to a prosecution of ‘disorderly conduct’, this would falls under the Crime and Disorder Act 1998 and in some circumstances is punishable with a penalty up to three quarters of a person’s wage.

However, police may not be able to bring about a prosecution as the Crown Prosecution Service currently does not prosecute on cases of road rage without evidence, such as footage from a speeding camera. 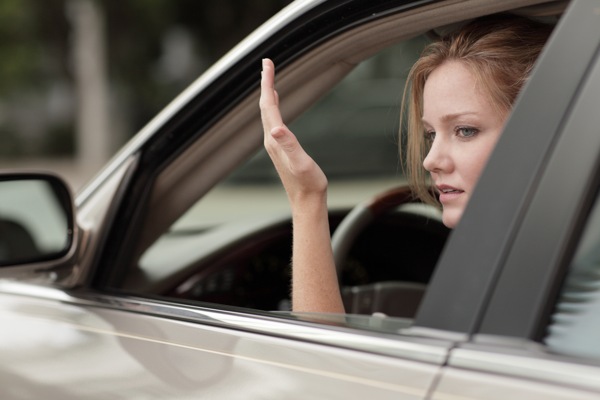 Click4reg sought to reveal what the most common sayings Brits use when overcome with road rage, surveying 1,329 drivers across the UK.

The research into road rage sayings unsurprisingly revealed that 78% of drivers admit they experience some sort of road rage, with nearly half stating this is a regular, if not daily occurrence (46%). Interestingly, a massive 66% revealed they are reluctant to beep their horn, as opposed to the 34% who assert they are serial honkers.

Respondents were then asked, ‘What are the most common words or phrases you voice when experiencing bursts of road rage?’.

Those surveyed were asked to list up to five road rage sayings that they most commonly shout out when enraged. Click4reg collected the responses and grouped together phrases of similar context to tally up and rank the most common phrases*.

From the data collected, Click4reg can reveal the top 10 most common road rage sayings by Brits: