Many remember their driving test as one of the most life changing experiences of their life. A driving test as nerve racking as it is, the test fills learners with an abundance of adrenaline, paving their way to freedom. However, as many know, it is never an easy ride. With so much to think about on the day, a sudden slight change in traffic, a car not indicating, or a simple mistake can lead to a disheartening fail. This is not least the case for those learning to drive in London.

With London recently being named among the top ten most congested cities in the world, as well as there even being a charge to drive within the city, it is clear that the streets of London hold issues when it comes to traffic. This equates to unexpected actions on the road, which learner drivers need to be prepared for when doing a test. Yet, however competent an individual may be, with tests come nerves, equating to low pass rates in London.

Click4reg.co.uk analysed recent ONS statistic, highlighting these difficulties of learning to drive in the capital city. Figures analysed ultimately revealed the disparity between pass rates in London (39.4%), in comparison to the national average in England (47.5%). 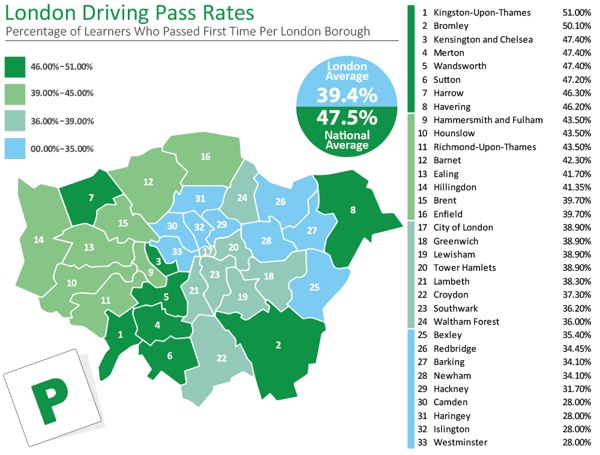 However, certain London boroughs defied these statistics with higher pass rates than the UK national average. Kingston-Upon-Thames (51%) and Bromley (50.10%) residents, had a higher chance of passing first time, with over half the learners in these areas achieving high rates. However, results emphasised those living in the more central areas of London were at a loss, as learning to drive in one of the most congested cities in the world.

Results also brought attention to the classic north-south divide. Those living north of the river, as well as west, ranked lower for pass rates, as opposed to those in South London, where first time pass rates are considerably higher.

Ben Leonard, MD of click4reg.co.uk commented on these stats stating:

“Data highlights that it is more difficult to pass when learning in a city. This is not surprising, considering the high levels of congestion, the number of vehicles on the road, and increased traffic measures put in place in London. Those learning to drive in central London are faced with large roundabouts and speed restrictions, resulting in a high volume of traffic and impatient drivers. However, further South of the city, individuals living in Bromley would be tested in areas such as Tolworth, filled with residential areas; making the roads calmer, and manoeuvres easier to master. When testing in routes that are a true reflection of the hectic transport in London, roads are seemingly more unpredictable, with much less certainty than in suburban areas.” 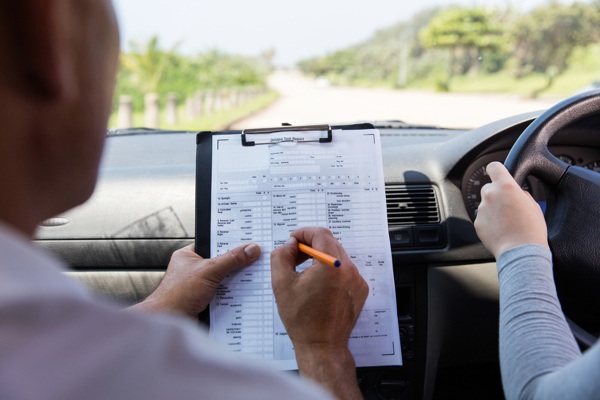 Even though those hoping to pass their driving test in London may be at a disadvantage, but following these tips by the Click4reg team will ensure a smooth drive to losing those “L plates”:

- Have regular lessons with a qualified DVLA Instructor

When learning to drive, aim to have frequent lessons. Book routine weekly lessons, this will allow you to progress at ease, keeping you confident so you do not forget what you did previously.

- Practice in between lessons

As with keeping up driving lessons on a weekly basis, it is important to practice in between. Practice can be anything from going out with a responsible driver who can observe your driving. However, they must be over 21 and be driving for three or more years. If this is not possible, continue recapping the highway code, or watch videos online, such as roundabouts or manoeuvres in order to remind yourself of driving protocol.

- Book your test in good time

When learning to drive, especially in a city, make sure you book your test with enough time to guarantee that you are prepared for it. Do not rush, or book the first available test which may not be so ideal. Additionally, when booking your test, attempt to book it at a time that may be relatively quiet on the road. You are much more likely to pass on a weekday between ten and two, than during rush hour where there may be a lot more traffic and uncertainty on the road.

- Ensure you have a comprehensive understanding of the highway code

Although you spend a lot of time studying for it for your theory test, it is important you brush up on it for your practical. Guarantee you have a good awareness of street signs and road markings in particular, as well as knowledge of who has right of way, national speed limit, and other rules you have previously studied.

- Remain calm and confident on your test

It is important to stay calm on your test, to ensure you are confident in what you are doing. When on your driving test, staying calm will allow you to focus your mind on the road and be confident in your driving. Second guessing yourself will lead to more mistakes on the road, and with the practise you would have done, having faith in yourself will help to guarantee a pass.