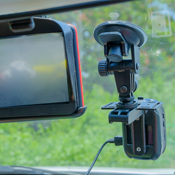 With many accidents and collisions happening on the roads every day, the British public have taken to installing dashboard cameras to avoid false claims and to protect themselves from insurance fraudsters.

A dash board camera commonly known as a “dash cam” is a small camera wired into a car which automatically starts recording when the car is started. There are many different levels of cameras which you can buy varying in price. They have a built in memory and record on a continuous loop. Dash cams were originally popularised in Russia where driving is exceptionally bad and the footage was used by drivers to prove who was at fault in an accident.

Over the last year the purchase of dashboard cameras has increased by 918% in the UK. This increase may be linked to the growing number of car insurance scams also known as ‘Crash for Cash’ schemes. Fraudsters are creating fake accidents to gain compensation, a common scam involves the driver slamming on their breaks suddenly in front of drivers then claiming to have whiplash caused by the accident. A dash cam can prove these claims false and drivers can avoid huge pay outs for damages to cars and stop their insurance premiums increasing.

Some insurance companies are offering a discount to those who have a dash camera recommended by them. “Dashcams give drivers an added level of protection to guard against unexpected malicious events which they might otherwise struggle to prove,” says Mark Godfrey, director of RAC Insurance. “By having a visual record, it is far easier for an insurer to come to the right conclusion and avoid the affected motorists being unfairly penalised by a potential fraudster.” It is important to check if your insurance company will offer a discount for a dashboard camera because it will save you money and will provide piece of mind during an accident.

It is not just drivers who have dash cams, cyclists also have cameras attached to their bike or helmet to prove dangerous driving or evidence of any accidents that may occur. It has been suggested that drivers, cyclists and pedestrians with video evidence of offenses taking place should get a reward for submitting the footage to the Police. With the Police force being stretched and the unlikely event that an officer will be present during all traffic offenses, video evidence that is submitted and if poor driving behaviour is present a percentage of the fee should be rewarded as a thank you.

Many drivers will upload their near misses or accidents to YouTube to highlight the dangers on the road. While it is unknown whether these offenses are taken further by the Police, officials are hoping these videos will encourage the improvement of driver’s behaviours. There has not been any evidence supporting this yet but we are hopeful that it will enhance road safety.

Will you be getting a dash cam? If you have one already has it saved you from a claim?

Let us know in the comments!

Ambulance calls should be made for life and death emergencies only. Given thi...

It was revealed in a recent survey that one of Britain’s biggest pet pe...