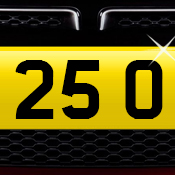 Have you ever seen a personalised number plate while you were driving to work and wondered how much it cost? CRA 5Y goes for twenty grand, but what about the single letter plates that are on the Ferraris? You have to have an expensive plate to go on such a flash car right? It’s like having F1 on an old Ford.

The DVLA holds auctions with personalised plate enthusiasts snatching up plates from as little as Ł350. Recently, a plate thought to bring in a great deal of money was ‘250 C’ which could be associated to Ferrari’s 250 GT California. Estimated to be going for around Ł500,000 it was shocking when it only reached Ł21,500 at auction. It was thought that DJ Chris Evans who has the 250 GT California in his collection - which he brought for Ł5million - would try and snatch it up for himself but no bid transpired.

It only takes a couple of people to be interested in specific plates before the numbers start bouncing up to the thousands, but what are the big ones, what plate has been sold for the most money? The top ten personalised number plates in the UK have gone through the roof, some of which are not even on cars!

8) ‘1 RH’ This plate was brought by business man Robert Harverson. You can see why he wanted it, he ended up paying thirty times the estimated price at Ł247,000. There was no coming between him and his number plate!

7) ‘51 NGH’ The popular Indian surname Singh sold in 2006 for Ł254,000. Motorists will definitely see you coming with your surname on your car, you probably shouldn’t cut anyone up on the road though because someone will know it’s you.

6) ‘VIP 1’ This high and mighty plate is owned by Chelsea FC Boss Roman Abramovich which he brought for Ł285,000. Supposedly this plate was put on the car that drove the Pope around Ireland. If that’s not travelling in style I don’t know what is!

5) ‘M1’ Mike McCoomb a mobile phone business man brought this plate in 2006 for Ł331,000. He claimed he brought it for his ten year old son. What a birthday present!

4) ‘1D’ No Harry Styles from One Direction did not buy this number plate. It was actually sold before the boyband formed by Nabil Bishara a Lebanese business man for Ł352,000. I wonder how many screaming girls chase him around town thinking he’s a member of the band?

2) ‘F1’ Until recently the Formula 1 initials were at the top spot having been sold for Ł440,000 to Bradford Business man Afzal Khan in 2008. The plate is currently on his McLaren Mercedes SLR.

How about that? The most expensive plate went for over half a million. How much would you spend on a personalised number plate? If you could have any plate you wanted what would it be? Let us know if the comments below!

Whilst most cities suffer with some form of clutter or rubbish issue, Dubai’s ev...

How well do YOU know your highway code? Driving in the UK is relatively safe,...