With another year coming to end, it is the perfect time to reflect on 2019. Unfortunately, from mopped and scooter crime, to knife crime, the UK has seemed more lawless than ever in the past year. With this in mind, we have decided to take a look at the vehicle crime statistics across England, Wales and Northern Ireland, and discover the outcome for these crimes- whether justice was served or if vehicle criminals remain at large.

How many vehicle crimes were there in 2019?

By scraping data from data.police.uk, we found out there were a total of 375,001 vehicle crimes in 2019 across the country. A further look into the data breaks down how many vehicle crimes were committed in different areas across England, Wales and Northern Ireland.

Where are you more likely to be a victim of vehicle crime?

There were 89,900 vehicle crimes in 2016 in London, but how many did the Metropolitan Police register in 2019? Click4reg.co.uk can reveal that the areas with the highest vehicle crime statistics in 2019 were:

In order to put these numbers in perspective, the % of crimes for these areas out of the total for England, Wales and Northern Ireland are the following:

Surprisingly, or perhaps not for many Londoners, over a quarter of vehicle crimes take place in England’s capital.

How many vehicle crimes were solved in 2019?

Click4reg.co.uk found out the areas that struggle to solve vehicle crimes the most are those found under the following constabularies:

On the other hand, the areas with the highest solve rate are: 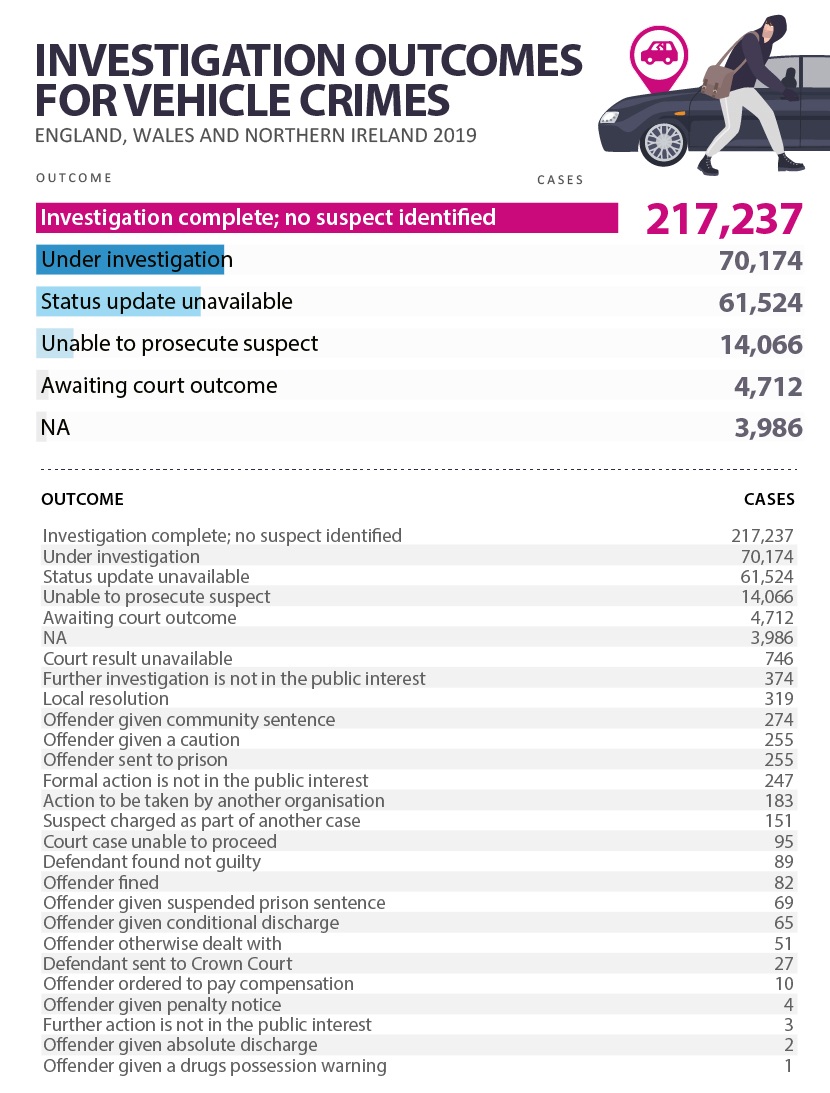 When it comes to the overall outcomes for vehicle crimes in 2019 for England, Wales and Northern Ireland, the figures show that in a whopping 217,237 crimes, no suspects were identified. This is the case for approximately 58% of all vehicle crimes.

Plenty of them are still under investigation –70,174 cases (or 19%), to be more precise. When the police were able to identify a suspect, they were unable to prosecute them in 8% of cases. In only 0.2% cases the offender is given community sentence, a caution or is sent to prison.

Which month are you more likely to be a victim of vehicle offences?

Furthermore, we decided to take a look at how many vehicle crimes happened each month in 2019 (November and December excluded), to see when you are most likely to be a victim of these offences.

The figures for all months are as follows:

If you found yourself to be a victim of number plate theft, we have written a blog post on the issue which will teach you what to do in that situation.

In you have questions regarding the data, don’t hesitate to contact us.

The rules regarding car tax have changed, and as of October 1st, tax will no lon...